Stock Analysts and even research directors here in Thailand as elswhere are often not very good at individual stock picking.  Thai smaller capitalized high dividend stocks remain inefficently under priced  -but you have to know them...and we here do.  They offer growth besides high dividends in a low interest rate world.

Despite their recent rise, Thai stock market valuations remain among the lowest in Asia as such they already discount many political concerns.  I seek value investor opportunities around selected  key choices which promise continued good earnings in the now faster Asian recovering economic enviroment.  I hold select positive investment views on over a douzen perceived good earning fundemental choices companies in the right industries, away from tourism.  Most companies I have visited in person.
I have noticed this myself over a 30 year career and even several of them told me so in person.  Other investor pro’s have also understood this whenever this subject came up.

One such senior Thai analyst on the scene for a long time is Mr. Andrew Stolz, whom held several top research director posts in Bangkok.  "I am just not a good stock picker’says Andrew himself, favoring expensive condo’s in Bangkok -and of course ETF’s . 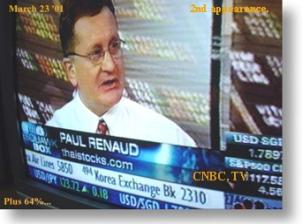 ETF’s are an abbreviation for “exchange traded funds” which simply track designated stock indexes.  They can lag good stock picking, often by a long shot because of market distortions.

There are just now over 3000 ETF’s worldwide, just tracking stock market and other indexes…including energy, gold, or even shorting markets etc.. Its a booming industry as it has its fans.  To some these are "all the rage", as they completely get away from individual stock picking.  Had you invested in such an index fund say 7 years ago, when the SET index was also around 800 (not much higher then current levels) then, you would be little ahead today.  Yet look what we here achieved here during this time!

These analysts then so differentiate themselves by insisting beating the SET index or any stock index for example is near impossible over time and so serious investors better just contemplate one of the thousands such offered ETF’s.  They charge fees for analyzing all these different ETF’s so coming-up with a complex matrix. That matrix, few understand except for these nouveau fee experts and so they can justify a new way of charging.

The key premise is that if you can’t beat a stock index, you have to go their advocated way. It is of course in their keen interest to keep up that “song and dance” in that markets are are assumed efficient -and if so its best for serious money to only consider ETF's/ End of story, or is it?

Because of this shortcoming these analyst experts shy away from any individual stock picking and advocate investors to do the same.  As its in their own interest to have it so.

Yet, in recent time times a number of reputable books have been published which show that markets are far from efficient -just as people are far from always rational.  One of the great classics in this is called “The Origin of Wealth” by Eric Beinhocker (2005).

Here is a 500 page fantastic work in fine print, which requires heavy reading to get through.  But those whom do, and I did, shows its complete nonsense to believe markets or people are always or even most often, rational. Markets like people are often not rational and in fact this is getting less so. (One reason why “Chaos Theory” has risen in prominence in recent years).

ETF's and top mostly down institutional investing has increasingly distorted emerging markets, especially so in Thailand.

Over time smaller cap’s in Thailand are often hugely inefficiently mis-priced...and so represent investor bargains. In time these often get recognized. Members have seen in the past years and again just in the past few months (and long before that) how my model portfolios’ often outperforms both the MAI and SET benchmark indexes.

But to just give some examples of irrational behavior which happen again and again and in many different forms.  I want to share just 2 comic examples which show how humans often do not act rational even as these high paid market rationalists would want us to believe.

1)  A rich man seated in an airplane between 2 others.  None of these 3 know each other.
He then takes out a bundle of ten, one hundred dollar bills.  He tells the neighbor to his left, call him Mr. Bill, I will give your all this money -no questions asked- but with 2 caveats: that you share some of this with your neighbor to the right with no bickering.  But if you two can’t agree, the deal is off immediately -and then neither of you will get any of these bills.

They so wake up the neighbor to the left and Mr. Bill tells him what the rich man offered, then says:  “I will give you a couple of hundred bucks for free and I will keep the rest”. When the awaking man grasps the full story he says, “but this is not fair…why should you keep $800 -and me only $200?”  Nope, the man refuses because it does not seem fair and so then nobody gets anything. When the rich man says, "but $200 for free is better then nothing" the other man answers “its just not fair -I’ll pass”.  Nobody gets anything and the rich man puts all cash back in his wallet.

This test and variances of it has been repeated in 37 different cultures around the world in all kinds of different settings and different economic backgrounds. Most always the person views it as just too unfair and rather takes nothing. This rather so, rather then the logical thing (market efficiency). As he could have just accepted the free gift with no morals attached.  Its refused on the basis of “its not fair”, or shows people/investors are far from rational all the time. Or another way to see it is how many revolt against perceived unfairness.

2)  Consider another short example, which you can try yourself without putting cash on the line.  Say you are sitting in a bar and there are some new coasters laying around, (coasters are used to put beer or drinking glasses on it). Take three of these and line them up. Then ask your friend to chose just one, any one.  She/he chooses one and puts it aside.  Then, take another new one from the stack and ask the person to chose yet another one of these 3. Almost always (but not always) they will chose the new one, this so instead of one of the two they just rejected.

What we find is that rejected items loose some of their value. Most of the people, as this test has been done many times across cultures, will chose the new one, while rejecting the same 2 as before.  Does this make sense?  No. and nobody knows why this happens. Perhaps it has to do with self enhancement: we want to feel good about ourselves and so we pump up the value of our choices and denigrate the road not taken.  Or, perhaps it is an evolved mental trick to make repeated hard decisions then easier? This is not limited to adults, studies have been done with 4 year olds and the same happens. Yet it makes no sense.

There are virtually dozens of proven examples like this on what is in fact irrational behavior and it shows again and again that people, even very smart people, just often do not act logically at a time when they should.  Stock markets can and are often in-efficienttly priced and in Thailand smaller cap high dividend value stocks are often more so; for all the reasons stated separately as these are very in-efficiently priced.  Markets like people can and do act irrationally at times but when you invest in ETS's you reject this claim.

While the high ranking analysts and research directors don’t want it so, no doubt so to justify big budgets analyzing and promoting these ETS, smaller capitalized stocks are in fact far from efficiently priced here….,but to begin with you got to be a good stock picker over time.

This leaves the question, why are such high ranking analysts not good stock pickers? I do not have the answer, perhaps they are just too analytical; as creating new wealth is a form of art, not just raw analysis.  Maybe they are nit picky on analysis and lose the big picture. Perhaps its because very few of these worked as a licensed broker trading stocks daily for years and being truly close with a pulse on that beast called, Mr. Market.  And so they advocate ETF's galore, all the while denying their own shortcomings.

Here is an example article/link I posted for members near the end of 2009, then a couple of months later for all registered users.  It again shows a long trend of outperformance and how I also incorporate bigger stock picks in my choices for balance and offsetting correlations. This is further demonstrated through all the model portfolios shown to members (but not here).