Thai intermediation of savings -is off the rails.

Thai intermediation of Savings is "off the rails".  Thai Investing/savings, to their own detriment, is often less than rational -by both Foreign and many Thai's.

In any capitalistic economy the so-called intermediation of savings/investment is a critical important core component of such a system.  It presumes that savers will broadly so allocate their investments in a rational way and optimize returns, seeking rewards, while minimizing risks and diversifying. To say it differently: it much assumes that capital owners are for the most part coherent and invest/save rationally across different choices. This for the most part means seeking high returns along with low risks in key different assets classes.  Besides business’s, property and financial assets being the core of such.

There can be no growth overall if there is no new investment is an economic theorem besides reality.  If all savers in a country just put their money under their matrasses (or say just buy gold) their economy and country would utterly stagnate in time.  Hence rational savings/investment intermediation in different asset classes is a critical important component of any capitalist system.  It is for this reason I (and some others on occasion) have often criticized the educational institutions as they teach language, math, chemistry and so much more, but rarely anything on the ABC’s around investing.  It’s a real shortfall and in my view “a crime of the century.” 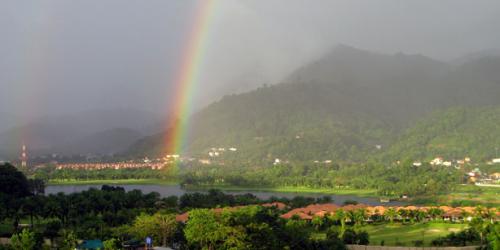 In Thailand this has alas gone to extremes.  Most savings/investment by Thai and foreign individuals has found into cash, property of some kind, or tourist related industries like hotels -and its many related businesses in that cyclical industry.

Over many years expats coming/retiring here have either purchased condo’s or built “nice houses” with their dire capital.  That's it. Very few have viewed/understood other credible domestic investing vehicles! There are many reasons for this, not least a lack of investor education, trust, seeking unbiased professionals besides broader understanding around alternatives. Hence to a good extend its their own fault.

This has increasingly resulted over many years in key resorts around this country to an oversupply of dwellings -of all kinds.  Almost all in this large group completely missed the many years of good Thai stock market returns which remained however to them -ever so elusive.  Others viewed living here in style but never investing here i.e. not bringing their own savings to Thailand for investment.  Both groups today have suffered in the sense that the first plowed their capital in ever more now saturated housing/condo’ etc.. and then go on complaining when they “can’t sell”.  Well Mr., its due to too much supply.  Or, the second group for years saw their Thai purchasing power dwindle -year after year- as the Thai Baht currency appreciated vs. their home currencies. (This however of late has finally come to an end as the Thai Baht lost about 10% vs. many other major currencies of late).  Then, there is broadly speaking a third group: these invested in the back then booming resorts/tourist/travel/tour industry only, which for years did well. Completely forgetting that tourist depending arrivals & spending has always been a cyclical industry!  Now in dire straights.  All three have only themselves to blame.

Actually, they are part of the problem as they just failed to invest more wisely and in a diversified way, rarely ever considering financial assets!  Today many thousands of expats complain on “can’t sell my house/condo”, when in fact they are the ones oversaturating this single asset class.  It took years in the making and now “it’s a fine mess”, as Laurel & Hardy used to say on film.  Of course there are many, many whom built desirable retirement styles/homes -and have no interest in selling and happy with their choices and lifestyle. Seeling is non their mind and fewest have mortgage loans.

Then, there are the wealthy Thai’s themselves. Many own businesses, an expensive car or two, maybe a condo in London, besides allot of cash in the bank -and that’s it.  Many if not most purchased ever more condo’s mostly in Bangkok and other major venues like Pattaya…less so in Phuket/Chiang Mai.  Presently many are increasingly vacant while rentals are dropping -of late.  These for the most part view alternative investments as just “playing” like Thai stock market trading and lately a younger crowd in crypto/bitcoin.  Not knowing or ignoring that there are various legitimate smart and able Thai stock exchange companies whose stock prices have done well (especially lately right during the pandemic attested with the SET flirting near its all time high level), while paying solid cash dividends.  Companies’ with low debt and solid earnings, despite the current covit-19 pandemic.  Again paying high current dividends…often 10 times more compared to idle capital sitting in a Thai bank savings account...which helps no one.  But some of these financial assets have been and likely now "investments which go begging” mostly because of lack of investing experience -also often meager and inept brokerage firms practices here.  For the most part Thai brokers advocate trading-speculating and other various industry shortcomings which as pointed out for long here.  Pardon if refrain making yet another list here.  This has resulted over many years stock market investing being viewed only as playing and not legitimacy to long term savings alternatives. Shown here for 25 years!

Together this has resulted in a not rational Thai intermediation of savings which has dragging consequences.  Rarely addressed and brings out the old saying ‘we have looked for the enemy everywhere -and found that its within”.