Thai Elections are now assured and the SET likely more buoyant.  (I wrote this member article around Jan 27, but was not able to upload it until today).

While too early to acclaim rejuvenation, it looks like as soon as the Thai elections announced, the SET got pushed to higher levels. Today I even notice some decent buying in some oversold smaller cap.’s.  I predicted Thai elections just had to happen in early 2019 and it looks dead set now that it will…and the stock market is voting so far with confidence.

I think this will sea-saw further up as the weeks and months pass.  Of course assuming there is no big global set back or other new “black swan” event.  The US Fed signaling patience raising interest rates further this year, is another plus.  Of course China slowing down is a wild card.

Foreign capital will pour into Thailand as it rightly so loves democratic elections but because its mostly institutional with their liquidity obsessed mandates, it will at first flow toward big cap stocks.  I am not giving up at all on PTTGC (67.75)!

On the other hand, as here amply pointed over a year ago, out smaller cap shares, have mostly been hugely trashed since 2016 -and hence there is scope of rebounds here as well.  Hence my opinion remains as it has for some time, await the Thai elections for a market rebound..and hang in there with a few select smaller cap.s.  There may even be outside influencers which could support a zig-zag rebound, like institutions shying the US market in 2019, while getting back in select emerging markets after last years deluge. Again, a more dovish (accommodating) US FED which will likely now brake some regarding its previous stand of relative aggressive interest rate increase projections.  PTTGC has likely bottomed regardless what GS says!  (I wrote this before the late last week rebound).

Hence my stand remains that things look better than in some time and there should be more then a few nice share recoveries along with dividends as the Thai season gets hot.  (April).’  I believe there is an outside chance Thai people will vote with some surprise to oust the current regime.

Yet, the medium longer term picture is more problematic and I have become more of a Thai cynic as you read here over the past year.  The inept broker behavior, the in my opinion failed securities’ industry here, the in time resumption of political muddle re-emerging?  But there is one more key/core shortcoming which I want to write about below.

Multiculturalism is a big word but at its core it addresses different cultural traits, the good and the bad the less understood -and more. My aim today is not to address this in any deep way, except as it relates to the Thai stock market. Of course, I now make general observations and obviously there are many exceptions and my aim is not moralizing. Surely all other cultures also have their “grains of salt” and deficiencies.  These have different effects on different industries, people, professions and norms.

I think most long expats here would agree that in general Thailand is not a very rule based society. There are many examples of this and perhaps in a future article I will attempt write about this more.. Pedantic is a word which in part describes the negatives of a person too obsessed with all the norms, regulations and following all rules, to a fault.  Yet, if we played a card game, or any game, its based on rules -and if we indulge we expect all to follow the games rules.  Would you play poker with a dude name Joe, if he does not follow the card game’s rules? Surely not, and no matter what his name.

Alas, fact is, a stock market is based on firm rules, obeyed which then instils high trust.  Trust that others follow the exchange rules and that those who don’t, will be kicked out a the very least and more likely punished with hefty fines -or even jail time. Trust is the most important element in any stock market.

In the US and other developed stock markets around the world, rule violators are not just fined in large amounts, but can and do get sent to jail.  Some years ago a big foreign investor contacted me wanting “to invest millions in the SET”.  The first thing he did was look how many insider trading violators where caught by the Thai SEC and how they were punished.  Just based on that single lacking criteria he wrote me, “no thank you”.

The rules are present here, but the enforcement so often is not, hence its almost like the rules are meaningless. This is what many of us observe in chaotic traffic -and Thailand’s high traffic accident rate. Vs. other countries which go well beyond police check points and de facto nail traffic violators by giving fines while all the passing traffic sees this; a fine in both money and embarrassment.

Too often this is missing here and hence rogue drivers keep up their dangerous practices, unpunished.  Similar to the stock market, the rules are often in place yet enforcement is often not. Lately the Thai SEC proposed fines to 2 very large prominent investors for manipulating stock prices. We will see in time what happens?

This lenience can transgresses both into broker and investor participants.  As just 2 mini example, stock markets have rules that all complaints by investor-clients, must be addressed and answered…or that IPO’s presented to a group of investors must be given a readable prospectus or if not, the IPO must not be offered them. A lax rule based society may have other indirect advantages (?),  but clearly not when it comes to a reputable stock market.

Gresham's law is a monetary principle stating that "bad money drives out good”, its a long established golden rule which holds up as much as physics’ law of gravity.  Its not just about good money driving out bad, but good people as well…whom just don’t' want to be part of an industry which they view as subdued, to say the least.  I am not saying none of the rules are followed, I am saying that some are not and that in any event punishment in general is too lax.

The other foul thing about this is that it grows as times go by -like a bad infectious disease which at some point can take the patient down. To me as a long objective and upbeat observer here, over the past few years this rule based laxness has gotten only worse. Everything always changes, but not always for the better.  Hence my discouragement in the medium to longer term, unless something mighty changes and addresses this.  In previous articles I have pointed out various such shortcomings and here I do not wish to make a laundry list, as its not really my place except to state my increasing discouragement. 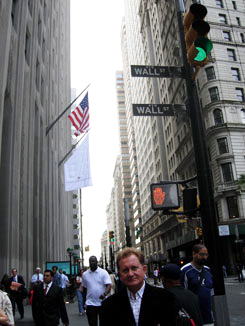 A story from the past. Déjà vu, all over again.

There is an old story in the Wild West, where a sparkling cowboy rides into a Western dusty town. He stops at the first Saloon on the outset of this town, only to see a bunch of burned-out old low ball ugly guys sitting around with their guns and whiskey in a smoke filled room.  Its boring and stale and dirty -and so he decides to ride on further into town.  Soon he sees a much bigger Saloon with so more going on, not least the piano playing and ladies’ smiling.  He stops there but is asked at the door to hand over all his guns, which the doorman claims “are the rule of this establishment”, in full glory.

Not long after he sits at a poker table only to get into a poker game obvious rule argument -on which he is right. But the rough looking shady dude opposite him stands up and shows his big gun hidden behind his vest.  To which the polished cowboy says: “I thought the rules here did allow any guns”.  The rough/rogue guy answers yes, “but I am an outlawed so the rules don’t apply to me”.  The rules only apply to the law-abiding people.  A gun fight erupts…and you can imagine the outcome.

In little time its back to not at all the same before: the Saloon perishes, is near empty same as to where it first came from -like the one at the start of that town.  Empty, lonely and not successful by any means, just the opposite.  No customers. The good people left, as did the money so did the girls -and the piano player was buried.  Back to dust -as it was before.  Just about everybody lost -and then some.