Submitted by PaulRen on Sat, 22/11/2014 - 8:11am
Category:
Company Visit
Toning down expected Thai economic growth a bit into next year, which very much hinges on infrastructure spending to at last take off.

I spoke to a SCB bank senior economist and heard a speech by the their top chief economic adviser.  We must realize the Thai economy just/keeps muddling along, other than green/renewable energy nothing is booming far from it...and unlike many thought the Thai economy has not picked up much as the year comes to an end.  The price of oil is down but so are is consumer spending, consumer loans, car loans and home mortgage loans. As the year is coming to an end Thai economic activity has not picked up, but also not falling off.  Just staying at the present stagnant growth level of recent months and only if/when mega infrastructures pick up will this improve.  On the other hand, Bangkok Bank still comfortably projects 4%+ GDP growth for 2015.

Time will tell which gets it right, while I am sort safely of in the middle.

We need to downtown our view regarding the length of the bottoming-out, with growth likely to resume next year. But is the 4-5% realistic for 2015? Probable less so today then felt some months ago.   Presently I would have to tone the more optimistic view earlier which means we just may see yet one last Thai interest rate cut?  All hinges now on the governments infrastructure taking off, still reasonable to conclude but it better get going as all hinges now on that. Thai higher VAT and new gift and land taxes likely next year in the making, are not helping.

The one area still upbeat is the green/renewable energy -with yes DEMCO still leading the way.  In a few days I will be visiting Luang Prabang Laos.  I hope to see Demco’s new project to build a water plant at Supanuwong University and the 12 KM water pipe to Ban Khoi school.  In addition, they plan to get the concession for construction of the underground power cable and underground telecommunication cable in the municipal area.  So its still very much happening with Laos despite not much official news on that.

MayBank’s Kim Eng report on this company is a bit lame as it does not consider Laos, nor the likely huge windfall (no punt intended) from their 4% ownership in Wind Energy holding which could fetch 3-5 times or more their cost price of 190 Baht per share. This broker is more and more interested in developing trading platforms and new ETF funds then beefing up their security research.  The biggest problem with Thai brokers’ marketing staff is and remains that they just do not see themselves as new wealth creators, only as commissioned salespeople. Some see this as normal and can't blame them, I say hogwash.

The SCB private banker meeting I attended at Sri Pawna, Phuket only confirmed this as they tell me how extremely difficult it is to convince Thai’s with wealth to securitize some of their saving/portfolio’s to higher returns. As they have been burned too many times in the past.

Surprise this: Realize, sometimes a broker has a run in with a client or company. Ours is a messy business where money is lost and made with hindsight/foresight which later can be criticized for good or bad reasons.  B a curse will always be if it occurred for irresponsible reasons. Thai brokers have not always been at the forefront of this industry to say the least, as we here known.  Many Thai and non-Thai people don’t invest in the SET at all because of poor/bad/horrible previous experiences often then brushed off as “SET is no good”.  Yet it is their or their broker strategy which is/was no good!  Hence there may be reasons behind the scene we may not know about for lack of research or coverage on some companies.  I have a hunch this may be the reason why at times some research coverage is just not forthcoming on what should be.  This can then result in all kinds of wrong conclusions.  As always since 1997, I am not waiting for brokers to pick up the ball and visit interesting companies, I do this on my own! As I just did again for us here.
Chu Kai Company (CRANE), the update based on company visit.
I just spoke to CRANE (4.10) at length last night.  Nothing has changed and management is mystified why their stock sell off lately?
Their company should see 15% top line revenue growth next year with stable net profit margins at 10 to 12%; they are acquiring more big large ton new cranes which will not increase depreciation much as many of their older cranes are already fully depreciated -and so do not incur any more accounting charges.
CRANE should see 1.2 to 1.3 Bill. Baht in revenues for this year and 15% growth on that for next year, so the 4th Q. looks better as they generated 967 mill. for the first 9 months.  Again, the CEO has no idea why his stock prices has fallen -as there is no material news.
He told me he pretty much promised an "Opportunity Day" SET presentation, in the 1st Q. of 2015.
You can see their web site:  http://www.chukai.co.th/
I picked up CRANE coverage in 2008 and the pictures you see here are from my 3 visits over the past. The stock in those days was sleeping at 1.5-1.70 and brokers had less then zero interest.  In year 2012 it shot up to above 10 and so appreciated eight fold in value since back then. Hence longer term members/investors have been rewarded -although not lately. 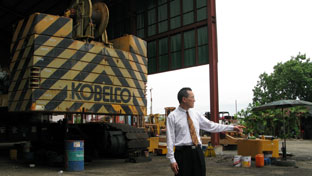 Chu Kai company (CRANE) is the sole exclusive importer of ZMlion Cranes from China. They have some issues to be addressed with this affiliation.  Like not enough support and parts having to come from China which can result in delays.  This is being addressed now and re-evaluated at present.
The company will be opening a new Surat Tani branch office shortly and is establishing a new in-house crane operator training school.  They are moving their service center to Laem Chabang Port (which I find interesting)
and employ there a very senior specialist UK high level lifting engineer.
In Laem Chabang some serious heavy lifting takes place, as its one of the world’s top 20 ship ports.  CRANE is also moving upstream to Laos.
Here you can see a Laem Chabang Port intro video, its not clear how successful CRANE will be in making serious inroads there as it’s a “good old boy’s club” ,  but we hear they will,  which would/could be huge.  The port has to beef up the quality of its cranes and operators due to a number of accidents over the years.
https://www.youtube.com/watch?v=qzZv3n5wqKI
Reaffirmed Revenues growth for next year.
The company’s new CEO K. Jessada just reaffirmed to me that their revenues for year 2014 should generate around 1.2 to 1.3 Bill -and that net profit margins should be 10 to 12%, we so can estimate the 4th quarter to produce around 33 mill of net profit; as I estimate around 300 mill. of revenues for their last 4th Q.  so to reach his own mentioned target.   As we see CRANE recorded 967 mill for the first 9 months and he just told me late on Friday:  “1.2 to 1.3 bill. revenues for all year 2014”.  Their 3 Q.  saw  17 mill. of net profit, so my conclusion is for a likely strong 4th Q. . I was also clearly told “1 Q and 2 Q next year would be rather good”.
CRANE’s revenues were 227 mill. in the 3 Q. and I know I understood him correctly: expecting 10-12% net profit margins.  On that basis the 4th Q. ’14 should bring in a near doubler in net profit, compared to 3 Q. ’14.   If you look at the first 9 months net profit margin it shows over 20% npm, but this is due to a one time land sale which occurred in Q. 1. ’14. 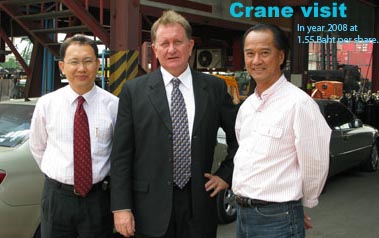 Next year based on guidance I can see this company’s revenues growing to 1.5 mill Baht with net profit some 170 to 180 million Baht, or some 0.35 to 0.37 Baht per share.  Last time this company’s annual profit neared 200 mill (191 mill in 2002), the stock shot to well over 10 Baht a share.  In that year their net profit margin was 14.5%.
Over the past 4 years (not including this year), its average net profit margin (npm) is just around 10%, so its credible the npm should come in around 10 to 12%, as the CEO tells me.
On that the company is trading only around a p/e of 11.4 for 2015, or 15-20% less then the average p/e of its sector.  CRANE states it pays 50% of earnings in dividends, so I can see a O.16-0.17 Baht dividend per share or for a yield of 4%
In June ’14, CRANE changed its listing from the MAI to be on the SET, into the  “Industrial Materials & Machinery” sector which as of November 17 ’14, has an average p/e rating of 13.7. (According to Tisco’s reliable “Snapshots”).
But I would argue with the hidden value of its so many fully depreciated cranes, the leading position it commands in what it does and a  likely big benefit from the at last, big Thai infrastructure spending coming next year and the heavy lifting requirement from Wind Energy and China/Thai railroad,  it should command a premium p/e rating.  Low share trading liquidity not withstanding.
My long term buy view is so maintained especially on this current share price weakness of 4.10, as by mid next year the Thai infrastructure mega spending should/will be in full gear which the CEO reaffirmed....The company buying more high-end cranes was the clear re-affirmation to me.  (Focused on larger 275 to 400 tons).  They are the leader in this, with a total crane inventory of over 12,000 tons. 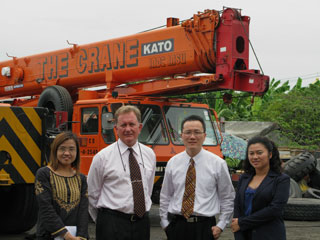