Submitted by PaulRen on Fri, 15/12/2000 - 12:00am
Category:
Industry
Thai Bullish for Year 2001! Here and now, we explore in some detail our 8 solid micro and macro reasons why we remain bullish on Thailand's SET.

While there are many reasons and unresolved concerned about next year, we on balance remain convinced the SET is in a bottoming process and that patient investors will be rewarded. Hence, we would keep a fully invested position.

As this year is coming to a close we reflect on the local market's disappointment. We shared our thoughts with you thinking a year ago, that calendar 2000 should see a further SET recovery. As it turned out, the much hyped "Y2K’scare was the joke of the decade. The new centennial year railed in and few if any problems were reported. Some skeptic on this told me "many US Gasoline refineries have been closed due to 2YK, as this is what created the seemingly temporary energy crisis", but I do not believe this and energy prices seem ready to slowly fall back to reasonable levels.

Yet, the domestic Thai economy remains relatively weak as the pending Thai election is holding much back. In retrospect we should have foreseen this.

Still our main message all along has been to mostly own deep SET values. Meaning, a group of shares in export focussed smaller companies. Yes, even some of the least liquid SET value shares; this with highest current dividends. Get paid while you wait, has long been our advocated overall investment theme.

In our "subscribers lounge" we mentioned at key moments, "ATON" and "NUAN" as our own NASDAQ wild choices. Both moved much higher in market price, shortly after. We also believe that post "US election fiasco", things will start getting slowly better, not worse in the oversold US technology sector. While by no means wildly bullish, we are clearly not ,"US bears" -like so many others. The focus here most only is on Thai stocks but on occasion, have made (in retrospect) some good US market comments since inception.

Stock markets and their inevitable trends show how wrong most people can be, us included. This is one reason why owning values and high dividends, as the only prudent way to long term capital growth. But keep your conviction, as individual private investors we have many (rarely explored by the press), advantages over institutions.

Here are our main reasons why we remain bullish on Thailand (and Asia in general), for year 2001:

All in all things are moving in the right direction -even while ever so slowly- this just at a time were some new sobering jolted the US markets. All the bad Thai business and political news is all too well known but is the coming political silver lining rightfully understood?

Some of the SET shares we have writing to you about are clearly among the least valued anywhere, in the rational world. This remains our primary reason for "pounding" the table, as on the SET it selectively remains, a "values galore" market. By the time it is clear things are getting better here, as we believe is the case, many of our "jewels" will move higher in market price. 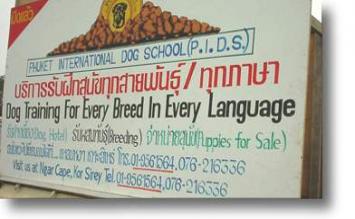 Most of all we have avoided and argued all along in year 2000 and before against owning the largest cap SET "performance dogs", since the bear market started in 1997!

Best Wishes for the upcoming Holidays (if you celebrate these), and Happy New Year 2001!

Best Regards to all valued Subscribers,