STPI to benefit from boom LNG expansion in Australia and SE Asia.

Members know I recently visited STPI (13.70), HANA (21.20) and PRIN (2.12). Thanks again to those members whom submitted good questions which I tried to all address.  I like all three of these companies, combined.

As stated, I would rate HANA and PRIN with solid buy views (on the correction now again) and rate STPI an accumulate-buy, only because we do not know yet where there next large contract will be coming from. But its coming, this I am convinced.

Today I want to review some on STPI and share why I am bullish on this company.

Like HANA, STPI is now only an export company in that its engineering services are currently focused on building "trains" for the LNG industry, mostly in Australia.

Due to the nature of its business STPI’s revenues are not smooth and can vary from year to year. Last year was excellent year and so its current p/e ratio very low -as we do not know yet how this and next year will look.

Recently LNG terminals is their big business, but they also helped build the Doha Aiport, where there is a second phase coming in 2011. The company has also been involved in the constructions of modules for the petrochemical industry, showing its diversity besides varied expertise. STPI also did some of the steel structures for

Suvarnabhumi Airport and has a long history as my reports from 2001 show, when I last followed this Co.

With some 3000 employees, one of the big competitive features of STPI along with its solid experience, is the relative low cost of engineers in Thailand. (As noted before with LVT). 80% of costs to STPI is for labor! This high cost factor is why the company can often be very competitive with other such global firms even compared to more developed countries, like Korea which is a key competitor.

You can see the company’s web site at this link is:

In the past 2 years the revenues and profits soared multiple times for STPI due to large LNG contracts in Australia, notably with Woodside Petroleum Australia’s largest publicly traded oil and gas exploration company and one of the world leading producers of liquefied natural gas LNG (see separate discussion on this Pluto developement). You can see Woodside’s web page at this link:   http://www.woodside.com.au/

Here you can see their financial profile, as shown at the SET web site:

I visited and then liked STPI some 9 years ago, then after it had a nice price run and we took profits and moved-on to other ideas.

Note, how the stock was exactly the same price (14) when I first picked it-up in year 2001. Recently it again it got my attention; as my call is STPI will announce again large contracts and so its earnings should accelerate again in year 2011.

Here below are 2 older article from some years back, which gives you further background/understanding:

For last full year my EPS estimate is 5 Baht per share, you can so see this company is trading at less then 3 times earnings. (They already paid a 1 Baht interim dividend and I expect a min-final dividend?). STPI already earned 4.13 per share, for the first 9 months of ’09. Their book value is around 9.50 per share. The company now has 289 million shares outstanding. It recently, around 8 Baht per share, bought back 35 million shares. This is called "Treasure stock", i.e. stock the company bought back so to manage the firm’s excess cash flow last year).

At STPI’s latest SET "news" link, they still show some 14 mill. remaining warrants outstanding, convertible at 3.09 and expiring in early 2013. The last price of the warrants is 11.60 and I would stick with the stock. The warrants are far too deep in the money and so have no real appeal, also they are less liquid then the shares.

Year 2009 was a challenge as many new projects got delayed due to the US induced global financial crisis so after some normal delay the company is left with a slower year 2010. The company believes various of these canceled projects will now come back to life and so is confident that as this year progresses they will receive large new contracts. The company does not have new capital budgets (spending plans) for year 2010. The company has no debt, only some trade creditors. Asking about their "big investments" I am told these are confined to large cranes and trailers with cranes. One additional advantage of STPI, besides lower labor/engineering cost and positioning in this industry, is their close proximity to the deep sea Thai port.

Besides Engineering offices/services/know how, the company principally operates:

STPI’s customers always supply their own steel so there is no risk to the company on steel price fluctuations. One feature of larger contracts STPI receives at times is confidentiality, where the company’s has to get client’s approval before SET announcements, regarding the disclosing of the amounts of the project. The company has no effect at all from the fall-out of the Ma Tha Put problem. STPI’s BOI tax privileges expire this year.

There are likely new orders coming in 2Q of this year and there is a large 3 Bill US$ LNG project pending in Queensland. (Realize I interviewed their senior accounting manager -and so she may not have much insights what is in the pipeline, nor of course can disclose it). I was told "their yards have been booked" and this is a clear indication to me that new projects are coming.

The family combined is the biggest shareholders with over 25% of the outstanding shares. Insiders have mostly bought last year 2009, with no significant recent activity.

Realize this stock has risen from less then 10 Baht a year ago to over 17 by mid last October. The consolidating between 14 and 16 since then. The obvious reason for the price rise until last October, is because of its huge and likely on going projects with Woodside. It is during this current uncertainty now, on new projects coming where members/investors should take advantage of the share price correction. Once new jobs have been announced there will likely be already a price spike.

In my opinion STPI are astute business managers with a long track record. Due to STPI being an export geared company now it is far removed from Thailand’s internal political commotion but not a reoccurrence of an Airport closing, which I just do no believe is likely to happen again!

What become clear as I visited for nearly 2 hours is that this company is prone to benefit enormously from the massive in capital amount in LNG expansion from and to Australia, over the next few years.

Thank you from all of us for this below added value member, pure gentlemen professional in AU. If we are lucky you will continue to share any updates on LNG expansion plans there. LNG is a huge business now at low pollution levels, and has a solid part to the solution regarding our ongoing global energy crisis. 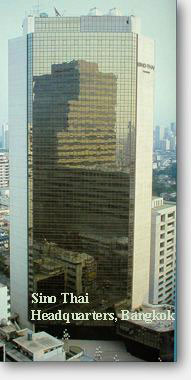 I view STPI as a keep accumulating at above 14 -but changed to a buy view at currently 13.80. The investor objective is for a medium-long term holding with above average earnings and dividends starting again in 2011.

Below is as what our member GEOTHO posted in our lounge a few days ago:

"In response to the little job put to me by Paul a couple of posts above on the growth of the LNG industry in Australia I post the material below. My conclusion is that the next 5-10 years will herald a period of incredible expansion in the Australian LNG industry.

"Natural gas liquefaction is achieved by processing units (trains), each of which typically produce 2.5 to 5 million tonnes of Liquified Natural Gas (LNG) per year. These trains are what STPI can fabricate.

"Historically in Australia Woodside Petroleum (WPL) has been the major LNG producer. WPL have demonstrated a capacity to successfully construct and run LNG production and export facilities. Due to the incredible expense (~10 Billion $A per project) this has been done when long term sales contracts are locked in. WPL operates 5 of these trains.

"The last 5 years has seen 2 of these trains completed and another to be completed this year. STPI delivered a train late last year for the latest project called Pluto. Thus WPL has a record of expanding LNG production and their future projections are credible, in many ways just more of the same. What are their future projections? Firstly note that the relevant Australian government minister said on Dec 22nd 2009 "I have granted Major Project Facilitation (MPF) status to Woodside's proposed Pluto LNG Expansion Project....." This refers to the construction of 2 more trains at the Pluto project, my reading is that that this project is highly likely to proceed. There are plans - not locked in, for a further 2 trains to be built at the Pluto site bringing a total of 5 trains.

"Four more trains are on the drawing board for development of other sites, these last 4 could be threatened by a possible lack of customers.

"Deals such as Sam notes above where Chevron have signed a huge long term deal for LNG supply with Petrochina is at WPL's expense however the Australian sharemarket did not hammer WPL when they lost the agreement with Petrochina and note that the Petrochina provisional agreement with WPL envisaged production/supply from the "Browse" project commencing in 2013?15, a timeframe that WPL cannot meet. The Browse project is one of those in the "other sites" category I mentioned above and I don't count it in my conclusion below. WPL may have felt that it was not possible to expand this fast, my reading is that this loss will not have any effect on the Pluto site development over the next 5 years. However the Chevron Petrochina "Gorgon" venture will proceed. The Gorgon venture is the largest of the planned LNG projects in Australia, the plan is to begin exporting LNG in 2014, with three five million tonne a year trains. The project could be supplemented by two more trains if enough gas is available.

"Thus exclusive of projects in Papua New Guinea and elsewhere I see 5 trains being commissioned in the next 4-5 years. STPI lists the refrigeration project as by far the largest in tonnage it has constructed and it was built over 2 years so 5 such projects is one hell of a lot of work. I have not researched how many companies in the region can produce such units but the outlook for STPI must be bright. Beyond 5 years there clearly are more projects possible.

"If you would like to look at what these units look like have a look at the video downloadable at this site http://www.woodside.com.au/Our+Business/Projects/Pluto/ look on the left side of the page for "pluto contruction video update", the STPI unit is the huge rectangular block with pipes going everywhere, it appears just past half way through the video, they term it the "main liquefaction module". I used to live in this area, it's very remote, dry, hot and dusty which is partly why they have to pay workers more to go there (but the fishing is good)."  GEOTHO

To which was answered:

"I REALLY THINK YOU TAKE THE CAKE WITH THIS REPORT/INSIGHT ON STPI,

"Hats off to you GeoTho...as post visit, I conclude this company is on the ball and capable, besides reputable ...and you showed/confirmed to us how much of a growth industry this truly is, in Australia. One train at a time. STPI is so a "pure play" on this globally mighty important newer industry.  STPI is so an indirect energy choice/pick.  Likely in other places of the world as well, not just AU." Paul Renaud."