The rise of the virtual state.

Submitted by PaulRen on Wed, 14/06/2000 - 12:00am
Category:
Industry
The rise of the virtual state.
A virtual state is a world where land is less important than educated people, labor, capital and information.

The Rise of the Virtual State. Wealth and Power in the coming century.

Increasingly developed states are putting aside military and territorial ambitions as they struggle for a greater share of world output. Rosecrance's book The Rise of the Virtual State argues that the world is making steady progress towards world peace and economic security through the creation of a virtual state. A virtual state is a world where land is less important than educated people, labor, capital and information. Investment in land no longer pays the same dividends in the wealthiest countries with commodity prices having fallen nearly 40 percent relative to manufactured goods since the mid century. Products of the mind now take precedence. As the virtual state relies on flows of information, capital technology and labor it does not have to expand its territory to cope with economic or political difficulties.

By transferring manufacturing abroad nations can concentrate on research and development. A virtual state specializes in modern technology, research services and high-level production techniques. It derives income from product design marketing and financing. As virtual states evolve a productive partnership will exist whereby 'head' nations design products for 'body' nations to manufacture. Body nations will in time create heads of their own and so this will not represent a new imperialism.

Transferring manufacturing abroad may represent a loss of jobs for western worlds. These, however, will be in less advanced manufacturing and it appears that the economy does not suffer. For example, real wages declined in the US after 1973 but are now dramatically rising. Additionally increased employment in services, mostly in middle and high level jobs, has compensated for unemployment in certain industries. As educational standards increase countries create better jobs to replace those lost to developing countries. Consequently western employment will not decrease but can significantly increase as illustrated by the US.

The idea of production abroad rests on the assumption that trade routes will be kept open and that production flows will not be interrupted. The dependence on assets situated within another nation represents an unprecedented trust in the integrity of other nations. Peaceful regions such as Western Europe north and South America and Oceania have progressed whilst turbulent areas such as the Balkans, the Middle East and south Asia have stagnated. Furthermore the market and international investors have punished countries that have channeled investment capital into armaments.

Nationalist resistance and the shift in the base of production have reduced the benefits of war. Land can be physically captured but information, labor and capital can slip away. When Iraqi Army ransacked the computers in Kuwait City they found the cash in bank accounts had already been electronically transferred.

The virtual states no longer command resources but it negotiates with capital and labor to lure them into its own economic sphere. Mastery of flows is more important than possession of large fixed territorial stocks of resources. Among the most efficient companies are those that possess limited home production capacity such as Hong Kong. Hong Kong's GDP comprises 83 percent services and about 8 percent manufacturing production. Meanwhile in the US services already constitute 70 % of GDP and 20 % of the production of US corporations occurs outside the US.

Increasingly countries with a very creative and educated workforce will move into services and leave production to emerging nations. Traditionally education has been undervalued socially and economically. According to World Bank studies 64 % of the world's wealth consists of human capital. The virtual state represents a world based on education and human capital rather than machines and physical labor.

With the creation of virtual states interstate violence should decrease. In the process of down sizing and moving production outside their borders corporations and nation states will have to get used to relying on one another. As long as the international system of nations persists conflict will remain as states inevitably see events from a national viewpoint and competition and struggle are endemic. Even as globalization reduces conflict in Third world countries it may increase inequality between skilled and unskilled workers in developed countries. The virtual state cannot satisfy all its citizens. Displaced workers and businessmen must be willing to look abroad for opportunities..

Rosecrance views Hong Kong, Singapore and to a lesser extent Taiwan to be major virtual states. Their basic strategy has been to employ Chinese firms to produce goods for them. Coveting a new strategy of economic prowess they have adopted the down sizing of firms as a national strategy and transferring their excess production elsewhere thereby avoiding building new production capabilities at home. All three have also upgraded their research and development capacities so that they can design and market products for manufacture abroad. 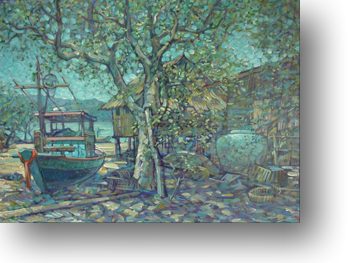 The three virtual nations have sought to assist other countries in financing and marketing their production whilst retaining some high-end production capability at home. By moving their more labor intensive production overseas (developing countries) they have established a consulting role in the economic future of other nations. The knowledge they have offered is worth more than their tangible exports of the past.

Singapore has adapted to rising labor costs by transferring its manufacturing to Malaysia, Indonesia and China thereby moving towards virtual state. Manufacturing has stabilized at about 29% of GDP whilst services have risen from 40% to 56% of GDP. Singapore stressed the "industries of the mind" at a time when its students attained the highest worldwide test scores in mathematics and science. Rosecrance believes that in the future Singapore's diversified strategy will help the East Asian come back from the financial crisis.

In 1949 Hong Kong was forced to develop its own manufacturing base following the communist takeover in China and subsequent boycott. In the 1980s and 1990s Hong Kong gradually moved its producing factories to Guangdong province, South China to benefit from its cheap energetic workforce. Hong Kong has been largely responsible for the boom in China's coastal provinces that today account for over 50% of China's GDP. Hong Kong is an exemplary virtual state possessing political and economic influence that radiates deep within mainland China. It will provide economic training to a new generation of Chinese leaders and become the world's most prominent service economy

Taiwan has followed a strategy of export-led industrialization based on small firms. In 1958 Taiwan switched to an export led growth strategy. Labor intensive manufacturing largely for export fueled the economy for the next thirty years. In 1988 the government allowed industry to invest and produce in China. By 1998 Taiwan had invested more than $35 billion in China and had become the second leading investor there after Hong Kong. All three countries have encouraged substantial foreign direct investment enabling an export strategy in high tech products. Furthermore they have diversified their production plants locating a larger proportion of them in other nations particularly China and Malaysia where costs are low. Taiwan has also invested in Thailand but as Thailand becomes more service orientated it too will diversify some of its production to Burma or even Cambodia.

The foreign revenue of Singapore, Hong Kong and Taiwan increasingly comes from financial services, income on foreign investment, shipping, insurance, telecommunications and software. The companies of these nations have become consulting as well as producing mechanisms. IBM and Motorola, traditionally manufacturing concerns, today derive a greater share of profits from services and royalties than computers and chips.

Thaistocks.com believes Thailand should focus on it's strength not throw itself on a grand plan of high Tech ambitions.

Here is what we just wrote in the Sunday Nation Newspaper, June 11 2000.

Should Thailand go all out on developing at full speed a much more dominant High Tech Sector?

Increasingly developed countries are putting aside military and territorial ambitions as they seek a greater share of world output. Rosecrance's latest book "The Rise of the Virtual State" * argues that the world is making steady progress towards world peace and economic security through the creation of more and more "virtual states". The new fully developed nations have an economy where land is less important than educated people, labor, capital and most of all information. Investment in land no longer pays the same dividends in the wealthiest countries with commodity prices having fallen nearly 40 percent relative to manufactured goods since the mid century. Increasingly, countries with a very creative and educated workforce will move into services and leave more and more production to emerging nations.

These fully integrated virtual states more and more will manufacture in developing nations. Hence these developed countries can concentrate on research and development and so specialize in modern technology, research services and high-level production techniques. It derives income from product design, marketing and financing know how and capabilities.

Most productive partnerships will exist whereby 'head' nations design products for 'body' nations to manufacture. Body nations (currently developing countries) will in time create "heads" of their own and so this will not represent a new imperialism.

The key question then becomes: should a country like Thailand do all it can do and so allocate large scarce resources just to enhance it's small but successful technology sector? Or, is this a self imposed "guilt trip" which Thailand does not deserve as it is simply not yet at this stage? Meaning, should a "body" nation try to skip out early on the stage it is now in or, should it focus full charge on what it's current strengths are?

For long thaistocks.com has advocated investments on the SET in mostly the manufacturing sector which is dominated by many smaller undervalued firms in attractive niche markets. While we like and have advocated some high tech companies like KCE, Metco, Hana etc we differ in that we do not believe this is what's its all about just now for Thailand; nor is this why the stock market of Thailand is so much out of favor and so oversold.

Transferring manufacturing out of a developed country often represents a loss of jobs for western worlds and an increase of jobs and money, to the developing world. Thailand is at a stage of development where it excels in certain manufacturing sectors. Should it try to develop too early a pricy high tech industry for which its labor force is not yet ready? While always keen to improve in the right direction, I believe focus on what you do best is often the right thing to do in life as it is for countries.

Hong Kong's GDP comprises 83 percent services and about 8 percent manufacturing production. Meanwhile in the US services already constitute 70 % of GDP and 20 % of the production of US corporations occurs outside the US. But Thailand is not and should not be any where near there and it's strength is in manufacturing cheaper, better and differently. Not going on a spree of over ambitious high tech plans which deviates too early from its current strength.

In Mr. Rosecrance's opinion the virtual state will represent a decline of major warfare and a general improvement in world prosperity. Yet, critics such as Mr. Paul Ehrlich contend that the importance of land will be reinstated. He predicts a time of depletion of oil and water supplies and a decrease in fertile land. Population will rise relative to the supply of natural resources and food. Under these circumstances Ehrlich claims clashes over territory could be resumed. But Mr. Rosecrance argues that substitutes to current natural resources will be found and that with increased technology land yields will continue to rise. Either way, Thailand has a lot of fertile land and plenty of food resources and so many secondary SET stocks are their treasure, not some grand vision too early. All things come in their proper time.

* Rosecrance, R. (1999). The Rise of the Virtual State. Wealth and Power in the Coming Century. Basic Books, USA