A pure growth stock in a desirable industry.

Anatomy of a growth stock.

UAC is my pick as a pure growth stock in a desirable emerging industry. I would rate it with a long term buy view.

The company just placed last week 24.3 mill. new shares along with 4.86 mill. new free warrants (1 new warrant, for every 5 shares) The pricing was at 7.90 Baht per share. These warrants have a 3 year time period, starting Feb. 1 2013, and are convertable at 1 to 1 ratio, at 7.50 Baht per new share. This public offering (P.O) was sold out at once and heavily over-subscribed -with fewest if any retail investors getting any allocation.

Core business to date has been service/trading.  UAC has long expertise in petrochemical products and related-equipment and is the distributor for many world class petrochemical products made by UOP, LCC and PALL Corp. UAC also sells absorbents and molecular sieves, filtration for gas explorers and producers, refineries, petrochemical plants, lube-base oil mixers, polymer, plastics, power and the utility industries. UAC is also a distributor for MEG and DEG used in the painting industry, as well as, solvents used by textile, polymer, engine oil, fuel oil  Revenue from Energy and Petroleum account for over 70% of the total.  Thailand’s  refinery capacity has increased near 6 fold over the past 12 years, from around 200 mill bbl per day, to currently 1100 bbl per day.

Global sales of diesel cars will rise 66% between year 2010 and 2018 to 22 million cars, by then making up 18%% of total vehicles in 2018. Growth will come mainly from N. America Eastern Europe and Asia.  According to LMC Automotive. 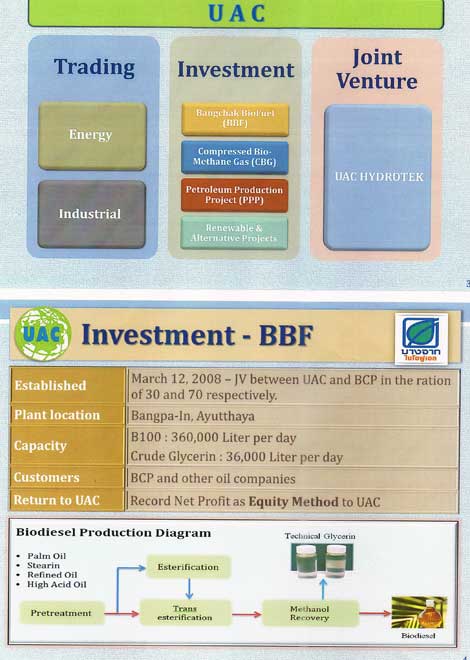