More cautious but still hanging on. 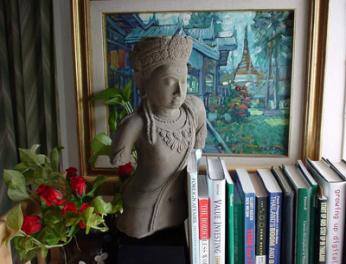 Reflections after continued superb performance -especially by our choices.

With many stocks trading at or near record highs, one has to
re-catch some vertigo and balance such higher values with the reality of
persistent low interest rates, high domestic Thai savings which now are being
mobilized -and in contrast to the global environment which is still lethargic.  This lethargy in fact helps drive liquidity here
due to higher flow of funds into the newer growth regions of the world.  As long as there is not another “black swan”
event,  the prolonged EU/US economic fatigue
along with the accompanied low % rates,  are all good for continued capital flows into
Thailand.

The Thai stock market has rocketed up to now being regularly
in the “top ten” best performing global markets -and this for many quarters
already.  The enhanced fundamentals are
supportive and I don’t think we are in a bubble -at least not yet.   Not
only have many listed companies recorded pleasantly increasing profits but the
corporate tax rate at the same time has been reduced by 1/3.   It’s a
double positive whammy.   While oil prices have remained stable its increasingly
clear that Thailand may have an electric power shortage going forward as I predicted.  The stocks which are part of the
solution on this, are the new emerging growth sectors.  One I have and continued to
favor for some time already.  Neither the
local or international news -nor the institutions- talk much about his because
the reality is its comprised by mostly by smaller capitalized companies.  So we got to do the hard work and find out for ourselves.

I like their stable growth prospects in place likely for years
to come, along with lowest correlation to events in USA/EU -or even tourism and
exports.   Exports and tourism sectors may suffer if the
Thai Baht gets stronger vs say US/EU and AU currency, as it gradually likely
will.  Tourism has been growing but is
more cyclical to global and domestic “black swan” events.   Hydro
Carbon credits, along with inevitable higher Thai electric prices will come
into play at some point -and this will help push the second leg of the green
growth industries which are now just taking off.   Just now hydro carbon credits have lost some
of their value and so attention, only due to the EU economic malaise.  But I am confident this will change again as
it must due to ever increasing global warming and pollution.

Thai Solar projects are secured through many diverse
owners’.  These are much shorter term
projects.  Wind is far larger in capital
& scale and so fewer in place with longer time periods needed to
completion.   The market here is just now saturated with
Solar projects because there are so many thousands which applied for a permit -and
then just sit on these permits.   Producing green electricity has a guaranteed
buyer and surely a benefit is drawn from delivering electricity without
pollution…this so deserves a subsidiary which is legally in place.

I can see in the future wind/solar/biomass infrastructure
funds coming.  I can see profitable green
energy will pop up all around Thailand and implemented by often very capable
Thai engineers.  These are for the most
part viable economic undertakings with good ROE’s.  Last year, Thai electric rates increased by
some 10% or 3 times more the level of domestic price inflation.

Broadly speaking, many smaller cap stocks are awakening here
as what I sense is a new wiser retail investor crowd now.  These often trade on-line and don’t often speak
to marketing officers as these are viewed as day trading speculator commission
driven.  These increasingly seek out
value stocks through growth and high dividends on hopefully companies they have
some understanding and liking.  It appears
like every time there is a SET mini-correction, more new money comes in from
these fresh local sources.   Huge amounts of domestic savings remain capped
in domestic banks here which easily more could flow into stocks –and it’s just
starting to happen.  Could this be the
sign of a market top, or the beginning of a more balanced SET with far more
retail investor participation then ever in the past?  That is the big open question  -my sense is that it’s the latter.

Since the start of this year and even before, Thai smaller
cap’s have outperformed larger ones.
Confirming the surge of retail investors coming and broker numbers
confirm this…, this is why its impossible to know where the SET index will likely
peak, or has already, for now?  To me the
bull market here has legs and will not easily be derailed nor has a major top
already been reached.  Still, today more
caution is in order.

The best we can hope for now is some kind of market consolidation
with then further advances as the year progresses.   If the market keeps moving higher now, say toward
1650, we later then would likely see an even more severe correction.  Wishing for the best is to get a correction
over now, while we relax and collect the high up-coming dividends.   Consolidation
or so called backing and filling is something not seen for some time with the
SET.  You often not get what you wish for
and markets often do what most, least expect.
So don’t ask me, even while I just wrote here so my views.

Regardless, my view is to hold-on or add to one’s good stock
list where we have added information, while at the same time holding a good
amount of cash as insurance for a potential destabilizer which could then be a
good buying opportunity.   Of course all along keep looking for new
ideas.   When the markets correct a worthy
buying opportunity will likely emerge but one has to be as selective as ever. I
hope here I can help new and more seasoned members.

As markets become more liquidity driven they so almost
always overshoot realistic values -but I don’t see this happening here,

yet.  The new savings shift by many smarter retail
investors, call it the 2nd generation, are increasingly seeing
stocks as a savings vehicle, not speculation. This could drive the market still considerably
higher.  The SET/SEC authorities have
also been stricter of late, quickly moving certain stocks to so called “cash
balance only” -and by considering price surge limits on new IPO’s.   Both brokers’ seniors and newspapers here
talk about “speculating in small stocks” without then explaining that this is
limited to a few -and there are still many smaller cap. high growth listed companies
trading at reasonable valuations.

Company profits are on the up with many I watch still
trading at or below a p/e of 15, on this years’ earning expectation along with dividend
yields around 3-4%.   Buying into current higher prices means you
have confidence in believing in the potential here for a longer term bull cycle
which I also agree is likely.  Low
inflation and interest rates, low company tax rates, higher domestic consumer
spending with stable oil prices are all signs this bull market has legs.  Not least,  more locals then ever before are participating.  The last long term Thai bull market started
in 1989 and lasted for 7 years. (Short interruption in 1992 by a coup).  Currently I would guestimate we are in year 3
and so have more to go.

Europe remains flared up and the US is imposing a nouveau
austerity through auto-spending cuts. There are other macro imbalances which in
time will impose potentially grave consequences:  like which global currency if any will best
hold up over say the next 3-5 years?   Post all this monetary pumping going on for
years already with now Japan the latest on board.   If you will,
“hiding ” out, in smaller profitable Thai companies with relative low
debt , still seems like a wise way to long term wealth preservation &
creation.   As a group these individual
investor jewels have recently gone from clearly undervalued to now more
rationally valued -but to this you have to add the global & domestic view
as here stated.

Valuation metrics viewed from history is not the right vision
as the global environment changed along with expected record number of new
retail investors; these have few alternatives in a persistent low interest rate
world.  We know there are many trillions
of baht in Thai liquidity just sitting in the banks earning less then 1-2%.  This is the huge potential now awoken which
could -and likely will- drive the SET perhaps even much higher.

There are still many expats, so called wealth advisors or
financial planners, which for years make their rounds promoting their non-Thai
funds.   For eons they claimed the SET is
risky, speculative and punter driven…so “stay away” is their advice.  They were wide of the mark as the past few
years have been nothing less then Thai stock investor, spectacular.    I often read or hear how they do not advise bringing
foreign capital into Thailand as it may be difficult to later take it back
out.  Totally ignoring the investor SET
doctrine which allows any Thai stock investor to wire his/her money back-out of
Thailand without any delays, Thai taxes or any questions asked, this as long as
it remains in the same name.  When in the
past I write these to correct their wrong understanding,  they just ignore this as it does not fit their
sales pitch.   Expats here, listening to
these self acclaimed experts, has cost many dearly by missing out on one of the
world’s best  performing stock market.

Some may think a forward
p/e of 15 on a Thai stock is expensive.
Why?  Many stocks in mature and
stale Western markets, trade at similar valuations but then offer no, or miniscule
dividends and meager future growth rates, if any.   Others may find these stocks expensive as
compared to Vietnam or other such secondary emerging growth markets.  But besides very low trading volume, these
have currency, corporate governance and extra-political menace far beyond
Thailand’s perceived risk level.

Lately I added MAJOR as a mid cap stock back to my
model.  I liked MAJOR (21.50) for some
time, but took profit last year when the stock performed well.    MAJOR
will double is movie screen numbers over the next 4-5 years and is benefiting
from a higher consumption trend due to high minimum wages and Thai economic domestic
resurgence.  Many other consumer related
stocks here are sky high in valuation with their prices doubling or tripling or
more, just over the past 2 years.   MAJOR
which trades at a p/e of around 15 just went XD last week for 0.48 Baht per
share.  MAJOR ranks in the top 10 highest
dividend paying stocks.  (See page
18  of Tisco’s  “Market Snapshots”).   I think its always good to have 1 or 2 large or mid cap stocks, in a smaller biased diversified value portfolio. AMATA has been a stellar performer of late.

To conclude then,  my
view is to remain invested in perceived overall good companies with solid fundamentals, while
keeping a good amount of cash on hand and accepting if there is a market
correction.  If investing more or new
money now,  be prepared riding out and tolerate some market adjustment, which then is likely a selective
buying opportunity to average down. The SET is likely
to remain well bid for due to EU/US lethargy which means continued capital flows into
Thailand.  Also due also
to a local nouveau retail crowd which has awoken to more rational investor
behavior/habits,  due to a better understanding around stocks as a form of profitable long term
savings, not just the old way of speculation.  I dare to say, times are changing for the better on that front.