Here below are the annual meeting & comments for you.  Also I made some revisions to my original bullet points on LVT post this meeting, as was here previously posted at the web site on April 20.  Please take another good look again, as this now replaces this original.

Here are some key points from LVT’s (1.75) annual meeting held in Bangkok on the afternoon of April 24th ’09.

It was all highly professional with about 45 people attending.  On arrival all registered at 4 long tables, set-up in front of the classy & large meeting room of the Radisson Hotel in Bangkok.  Upon confirmation of being a duly registered shareholder (must show passport) one was given an LVT pin to clip on the shirt/jacket and allowed in the meeting room.  All senior management and directors of the company seemed present there.  I talked to the Managing Director for a few mintues whom was not aware that the stock price was the lowest valued on the MAI/SET.  “Maybe so I should buy some more”, he responded.   It was all cordial and highly professional and the room’s background was green, all very appropriate for this company.  LVT does not mention anywhere that it is a green company. 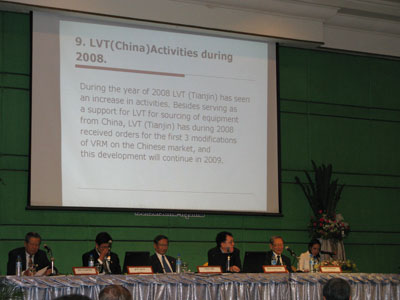 After the presentation in English by Mr. Nielsen (which was instantly translated into Thai language), there was one Thai shareholder and one Thai reporter/shareholder which asked several & varied questions in Thai language.  I did not understand most of it.   Including, “may he please have an overdue press interview”, to which management answered they are “extremely busy”.  We later told mgt. please do occasional press interviews’  as this should be part of their jobs.   Here are some other key things I got which were not shown on the slide presentation.  I presume this presentation will shortly be uploaded to their web site as it was all filmed/VDO.

1) China now has some 30% of the world market in cement production, so there is a big change to Asia. No question LVT is a good position to be there.

3) Big EU cement facility-building companies have reduced their staff by 7 to 50% over the past year, all due to the global recession, vs. LVT which has increased its staff by 50% and in fact this is still increasing this year.  Remember LVT brings vast efficiency improvement to existing plants, not building of new cement plants. 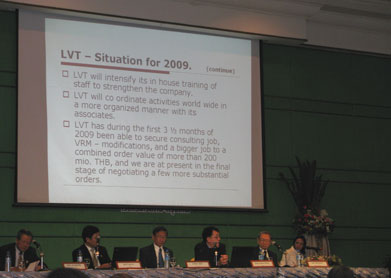 5) LVT has about 40% of the market share in  S. America in what it does.  Surely impressive as this is a huge market.

6) The companies’ revenues are just about 99% from outside Thailand, so the current political disorder and rapid economic slowdown has so no effect on LVT. 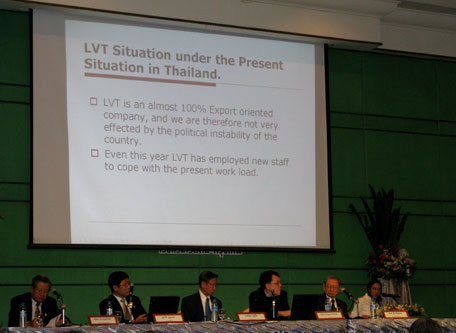 I then asked a few questions just to clarify some outstanding issues I had :

Yes, the company will consider a share-buy back program at its next board of directors meeting, which I understand is on May 28 ’09 (every 3 months).  To the question if their Indian associate company fast growth is now slowing down, they stated something like “perhaps the growth rate just a bit -but they are now also securing new jobs in the Middle East as well,  specifically in the UAE”. 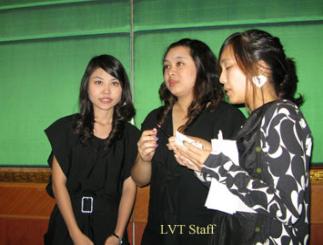 LVT feels Thailand should/could help them more with EXIM Bank financing guarantees as their competitors are getting in other countries (as is explained in one of the slides, shown separately).  This is what they meant with the statement that they are not getting any help from the government despite paying nearly a million US$ in corporate taxes last year. 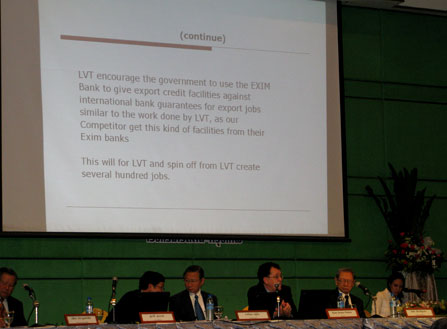 I then pointed out that on page 79, point #4,  of their ’08 annual report it states “The company had cash balances at financial institutions as of Dec 31 ’08 in the amount of 318 mill Baht, as compared to 207 mill in 2007”….for the purpose of ”cash deposits as security for loans extended by financial institutions as well as cash as security for work performance”.   This, duly note, is in addition to the 191 mill. Baht cash they show as on the balance sheet.  When I pointed out that the total cash on hand so is: 191 mill.  Baht plus 318, or 509 mill Baht,  I was told by the senior accounting lady that under Thai accounting principles such cash deposits for purpose of bank security guarantees may not be classified as “cash”.   I was then tempted to say that if the 318 mill. security deposits is not considered cash, then what is it?  (Just at that point in the afternoon session, the shares rose about 3.5%, as the mobile phone showed me).  Consider,  509 million Baht cash or surely its equivalent, divided by 321 mill. shares outstanding,  comes to 1.58 Baht of cash, per each share outstanding. 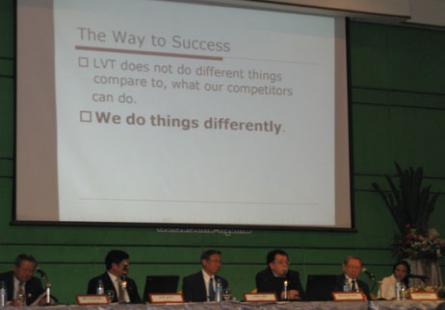 In its very professional and well done ’08 annual report LVT it mentions on page 39 “Rotary Kiln improvement of the technology which is a new product of the company”.  I was not able to ask more about this.  In the annual report, the left hand side is in Thai language, the right hand side in English.  I read all 153 pages and came up with nothing concerning and alarming, of course the auditor reports are not qualified.  The auditor is PricewaterHouseCoopers  ABAS Limited. The Indian associate company is also audited by the PricewaterHouseCoopers .

“Despite such recession envision in the world economy, the cement –related industry in certain regions and certain countries such as S.America,  Africa or Russia, where need is felt to the improvement of technology with a view to enhancing efficiency of the production remains in constant demand of engineering services.”  From LVT’s annual report, page 33. 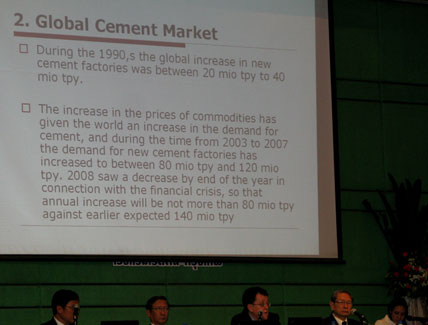 At present, F.L Smidth of Denmark  (FLS) holds 13.02% of LVT’s shares. Here the original intent was doing joint research in the cement industry.  However,  FLS already sold on the open market its recently converted warrants into the new shares in February and March of this year, this is one reason why the stock sold off below 2 Baht per share in March, despite LVT’s impressive earnings report.   LVT’s agreement with FLS is to expire in September of 2009 and will not be renewed.  After me asking if this means FLS will divest the shares, I was told the ending of the agreement is not tied with FLS divesting these shares.  Surely, FLS has taken due note how well LVT is doing. 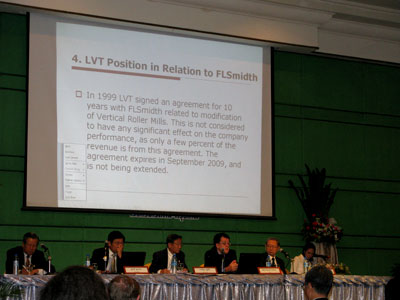 There were no other questions and the meeting ended well lasting about 90 minutes.  I was satisfied and impressed -and so voted “yes” on all matters.  It must be remembered that LVT senior management are all highly qualified engineers which are intensely focusing on results and their business and so in the past have been a bit negligent on IR matters.

This is now all changing for the better and I still shortly expect a Bualuang Securities report on them very soon. They duly note that they follow all exchange rules and even received a merit award on this, LVT is a most conservative company. 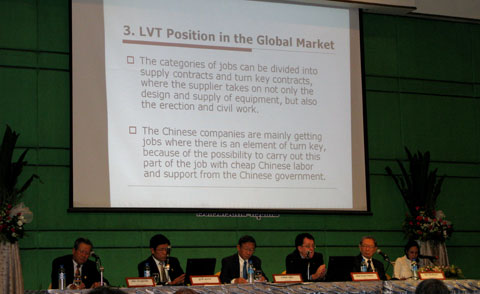 * Note all pictures are from LVT's annual shareholder meeting on April 24 '09 held at the Raddisson Hotel in Bangkok.

L.V. Technology Public Company Limited .   (LVT 1.65, listed on the MAI stock exchange in Bangkok, Thailand.)  LVT business operates as an engineering services specializing in the cement industry, by designing and applying a new concept for grinding of raw materials and the flow of gas in order to improve production efficiency as well as to reduce the electricity power consumption and to improve profitability.  LVT is very well known/respected in the cement industry.

* In March 2006, LVT entered into the People Republic of China by forming strategic partnership with Fu Yang International Co., Ltd. and co-established LV Technology Engineering (Tianjin) Co., Ltd. to provide engineering services to the Chinese cement market similar to those of LVT. This company has a registered capital US$ 120,000 of which LVT holds 50% of the interest.

LVT’s web site link is shown just below.  And in mid May a new more investor friendly IR oriented web site will be launched. Stay tuned.