Investors beware on IPO's in Thailand, how they are issued and fare over time.

Bangkok Airways  (BA, 12.70)) came public with much fanfare later in year 2014, at IPO price 25 Baht.  At the time we were told how lucky we got if get any allocation.   At the time I sensed it was well over priced and did not dare touch it, scratching my head what the Bualuang Investment Bankers (IB) where thinking, or where their alignments where? See details below.

BA’s stock price vacillated around there for a while, albeit at lower than its IPO price; this so despite low global oil prices at that time along with a strong Baht currency -and increasingly soaring tourist arrival numbers. The SET index was just below 1600 back then. Today, with the SET at 1703 or 6% higher then back then,  BA is trading around 12.70. Yes around half its IPO price -as BA’s net profits since dropped more than half.

If you take a look at this SET link company profile on BA:  https://www.set.or.th/set/factsheet.do?symbol=BA&ssoPageId=3&language=en&country=US    you readily see how BA’s net profit dropped more than in half since year 2016, barely a year after it went public (IPO) and when Bualuang’s IB back then did its IPO due diligence on the company.  Most appalling however, is the graph at the top of this link/page shown:  see how over the past 2 years shown there,  the SET transportation sector index roared up +82% (light blue line),  vs. BA stock (dark blue line) dropped -32%.   A huge divergence.

To the observant & experienced stock investor this is nothing short of galling.  In late 2014 investors were offered the BA IPO, at a trailing rather high trailing p/e that time of 29, just a year before a massive drop off in earnings. Just the opposite of what a premium p/e expects.  And now, post loosing half its stock price since IPO, on Friday August 25th, 2018 Bualuang Securities analyst (email)  suppata@bualuang.co.th, publishes a positive buy view on BA, even while Ms. Suppata projects a very low single digit earnings growth of less then 3% over the next 2 years.  In her published “update” report on August 24 she expresses her upbeat view, despite BA’s stock trading at (as she shows) a trailing and forward p/e of 33. (As earnings are stated as not growing).  Now, just asking, why would any rational investor even consider a p/e of 33, when the analyst shows no earnings growth for the next 2 years -and the post IPO was so disappointing.   (see below report from Bualuang on BA).

Thai stock investors beware.  Thai IPO's here seem regularly overpriced and rarely, if ever, publish IPO prospectuses in English to foreign investors here, even while some are so published to foreign institutional investors outside Thailand.  Offering IPO's without a readable prospectus goes against any reputable securities' industry practice.

Yet the broker cherished speculators pounce on these IPO's in the first days or weeks, post IPO start trading...and so bail them out. Yet far too often the stock price all but collapses months or 1-2 years later as did BA.  The same and worse with similar drops in earnings and stock price, shortly after IPO’s, recently where TNR, DDD -and others. Where is the due diligence of the broker’s IB department.   Odd, strange and sad nobody writes about this.  Also to my knowledge, unlike other stock markets in the world, there are still no lists available where an investor can monitor IPO's performance say 6 months or 1 year later with the broker name whom brought them public.  Is that no convenient for the brokers...and why does the SET/SET not mandate such a deserved follow up besides transparency.

PS. You can see Bualuang's report on BA here, if this link does not work please send me a mail and I will forward to you as supporting evidence of the above.   https://screenshots.firefox.com/OOwgHeaXjbnBbOk6/null

Or see here, note the lack of forecast growth in EPS over the next 2 years,  and along with its high p/e ratio: 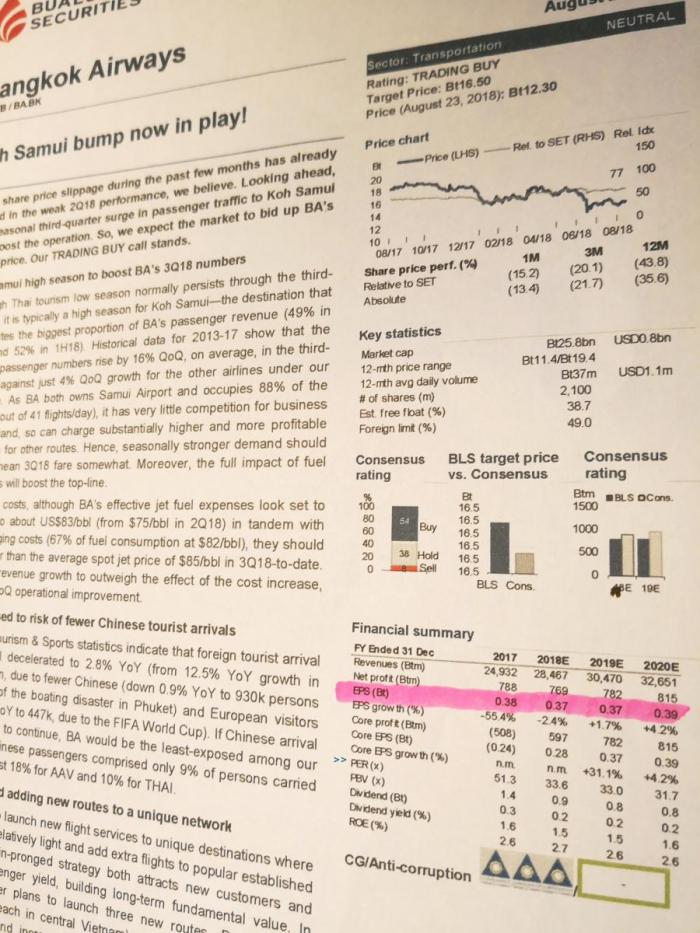