Dire times in US/EU coming which will bring much new suffering.  US Treasury Secretary Yellen and the Fed blew it, and should be fired? But doing so would only alarm markets more.

We are at a critical & dire time in the US economic development at present.  This is something I understand better than many due to my extensive previous professional US background. Here is the problem:  the Fed (US central bank) just waited to long in raising interest rates...which it should have started already last Fall.  Now its behind the curve and has to catch up.  Think of it like this: the patient it not doing so well and needs antibiotics, the Doctor in charge believes its not too serious and can "buy some time" or administer a gentler measure. Mai Pen Rai.  Time goes by and the patient gets worse, yet the doctor hesitates...  Some time later however, the fever comes back and the infection gets worse (inflation).  Now suddenly the Doctor calls in others as he gets alarmed and so now has no choice but to: administer far stronger medicine (i.e. higher interest rates).  Inflation is the "infection",  "antibiotics" is higher interest rates, in this metaphor.

Unfortunately, many investors have been brainwashed to believe that the Fed will back-off because that is what the Fed so often does.  And more then ever before in my view. But this time is different: The Fed has a real problem now on its hand as inflation is running too high and the average person falling behind, ever more.  Real wage data (adjusted for inflation) shows that if the Fed doesn't bring inflation under control, wages will have to start rising faster than the inflation rate, which means the Fed will have completely lost control.  With that I mean it can't raise % rates fast enough to contain inflation -and the "patient only starts getting worse", to an alarming point.  As expressed in previous articles on this: higher interest rates are always inversely related to stock prices.  Meaning, the higher % rates go, the lower stock prices must sink. This is Finance 101.   (Picture is Zurich-Lake and the Alps).

Hence in the US at least, things may get allot worse before they get better!  There has never been a time in history when unemployment in the US was below 4% and at the same time inflation above 4%, without then an economic recession emerging months or a year later.  This is the bad news.  However, this time may be a bit different in the sense that there are pockets of strength, along coming weaknesses across the global economy. Its very uneven.  Further, there could always be a sudden reprieve?  What if Putin suddenly fails and oil prices then collapse, or if Saudi-Arabia suddenly open its oil tabs far more?  Demand-destruction will also start setting in soon with oil prices at or above 120$ a barrel?  It could also be that post the Western-summer pent-up, post covit bubble, consumer demand drops off fast and the US/EU economies cool.  Setting the stage for taming inflation and less need to rock up % rates towards the end of the year?

All difficult, even impossible, to predict except to state here again that while stock investor sentiment will cool across the globe, select Thai stocks remain far removed from the US (especially the US high tech bubble) should fare better along with continued high dividend yields.  SMD, Thai medical supplies at a very low p/e ratio,  PPM, Thai solar-energy boom, Banpu global energy choice doing well, AUCT local Thai car auctions,  WFX, STA, and TOG exports of a fairly defensive products benefiting from a stronger US$,  and more as here outlined -remain my choices to hide during the coming likely more market turmoil.  For now.   (Picture is Swan Family) 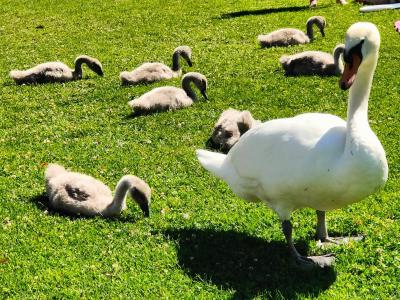