Demco the company in person visit at their headquarters and update.

I spent a good intense 2 hours last Friday afternoon at Demco’s (4.78 closing price last week) headquarters, which is about a 1 hour drive outside Bangkok, in the country at Pathumtani.  The parking lot is now completely overflowing with my driver having to double park and stay nearby so to move it regularly as cars were coming and going.  I then hit the Friday afternoon traffic on the way back into town and got to my hotel completely exhausted from the long week. 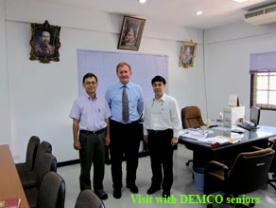 I met with the CFO, K. Paitoon and the assistant Managing Director, K. Phongsak. The current MD, Mr. PRADEJ KITTI-ITSARANON, is retiring next April ‘11 and will so be replaced by the highly intelligent and personable Mr. Phongsak Siricupta, both are original founders of DEMCO.

Here you can see their web site:
http://www.demco.co.th/main.html

I have published various article on DEMCO over the past 3 years, starting with this one on February 17 2007, you can see this here. /index.php?module=Pagesetter&func=viewpub&tid=1&pid=761

At that time (Feb. 17 2007) its stock price was 3.14 and since paid good cash and some stock dividends, besides issued 2 free warrants. Combined with these shareholder sweeteners, DEMCO has been a good total performer well beyond the MAI or SET index. I think this out-performance will likely continue into next year. The number of shares outstanding has more then doubled during this time, to now at 435 million. It will increase further up to 635 million shares, over the next 18 months as they just announced 2 new free Warrants #3 and #4.  These will rationally not get converted until next year. Investors always worry about dilution and so do I, ok.. but lets not forget along with this comes higher average daily trading volume and higher market capitalization, which institutions by definition must be obsessed with.  Higher trading volume and market cap bring higher p/e ratio’s in time.

We can expect the company to pay an interim dividend this year, even while DEMCO is getting geared up for the massive revenue, backlog and earnings expansion into 2011 and beyond.  I note the D/E equity ratio is a miniscule 0.2, so here is yet another high growth company with high expected current dividend yield –along with nearly no debt. The company’s book value is shown at 2.54, but this is not a meaningful figure as it is a professional service engineering firm, not an asset play choice like for example CRANE.

In February 2007, the company employed 375 workers and 70 engineers, this stayed around the same for the following 2 years. Yet, today the company states it employs 420 workers and 110 engineers!  I duly note how the over 50% increase in engineers attest how DEMCO is confident on its strong business expansion over the next 2 years and beyond. Observing this the company’s principals smiled in agreement.

As well noted in previous reports, last year was a transition year for them as besides the global economic downturn, far more importantly: this company has been gearing up for massive expansion later this year and more so next year.  The political uprising in May had virtually no impact.  This is an added investor attraction in that its far removed from tourism and political bickering.

Bref, here are the key things I learned or was re-affirmed at this informative visit:

--The backlog remains at an impressive 6.5 billion Baht, which is an absolute record.

--The high cost steel inventory which dragged on earnings last year, has now been eliminated completely.

--There are all together 10 planned wind projects over the next 3 years, of which 3 have been fully approved.  One 60 mgw, and two 90 mgw projects, combined worth 3.5 Bill Baht. The difference from the 6.5 Bill., comes from their core business which is now 90% services, this is higher margin business then sales.  These 3 projects are a “done deal”, the only thing awaiting is the exact electric "adder rate" which the Thai government is likely to announce by this month end, likely at a BTAC green energy exposition next weekend.  (June 28).

The expected adder to be announced is 3.5 Baht per electric unit, this is the premium which EGAT will pay for such green energy and so is the given “tax incentive” for such projects. The wind energy industry here is now anxiously awaiting this adder rate announcement as without this number set, no project can calculate the exact IRR %.

A delay on this, not likely but always possible with Thai politics, would be at most until October according to them. The juicy thing about these wind projects is that they do not incur any material risk as the company will command a pre-set 15% net profit margin. (NPM).   The average wind speed there has been measured over 2 years, at 5.5 meters per second, indeed attractive enough for class 3 long wind blade technology from Siemens (Denmark).  These do not pose risks for birds as they turn more slowly.

-- The company is in a position to immediately build the new steel towers required for the 3 G phone technology as soon as this is announced by the still foot dragging government on that. The whole country is waiting. This is a 25% expected gross profit margin (GPM) business and will be handled by their factory at Lopburi. Demco believes it will get this business. We have not included this in any projections. Remember DEMCO built all the DTAC phone metal structure towers.

---The warrants #3 and #4 just announced (no share dilution expected until 2011) will be to finance a new Solar Farm on 500 Rai of land near the Moon River, next to EGAT, in the Udom Ratchatani Province.  This is a 2.7 to 3 Bill Baht investment which Demco will own outright!  It will be a 30 Mgw. undertaking with a pay-back period of 6-7 years. The cash flow expected is 450 million Baht per year and construction expected to start in early 2012.

The adder fee for Solar is higher at 6-7 baht per electric unit. The “engineering is so easy on this project” (so no risk) and it should receive BOI privileges.  The IRR is around 12-15%, assuming an average of 5 hours of sun per day.  Silicon wafer, the raw material used to make solar panels has dropped considerably in price (I think its 5 times cheaper now) in the past 2-3 years making such projects now attractive as Thailand has lot of sun.

My own impression is that Demco will be building this solar farm with the intend on selling it for a nice extraordinary profit down the road.  It shows again how DEMCO more and more is entering the green energy field and so becoming a green expert energy company. Due to its expertise as noted in previous reports; it’s a key player/leader and should command in time a premium valuation.

--Much smaller is a TOT project for fiber optic cables estimated at 150 million, also the company can do Biomass (from rice husk) energy but in mgt. opinion these projects are less interesting.

The company still feels optimistic it can achieve the 5 billion Baht in revenues this year, but this depends on the government announcing the adder rate, later this month as noted. If this gets delayed (at the latest until October) only due to the exact feeder rate, then some of these revenues will be moved into next year.

Belos is an earnings model which I worked out based on my visit good understanding and the notes here above shown:  3.5 Bill for the first 3 wind projects this year, at 15% set net profit margin, this comes to 525 million Baht net profit.  This is a very low risk business and only awaits this adder rate.  From the stated backlog, 3.2 bill. comes from their core business and because this is 90% services, the profit margin is estimated at close to 6%, so lets assume 5.5%, or 176 million Baht.  Together this so comes to an estimated net profit for Demco over the next 18 months, of 701 million Baht.  That is, assuming nothing else new comes their way which is not likely.  It is difficult just now to know how much will flow into this calendar year 2010, but if less this year then only more so next.

My estimate remains around 360-370 million net profit this year and slightly more for next, as its too conservative to assume they will not attract some other new business. I emphasize this is not a "one off" great year for them but very likely sustainable due to 10 such wind projects being planned -and a new Solar Farm planned.

The company now has 435 million shares outstanding so the earnings per share in this estimate comes to 0.85 Baht, at the current price of 4.88 this is a 2010 p/e of only 5.7.
Next year the shares outstanding will increase to a potentially maximum of 635 million, assuming all warrants are converted.  If you take 400 mill. net profit, then divided by the max. 635 mill. shares outstanding, this comes to 0.625 Baht per share or a projected 2011 p/e of 7.8.

But remember, the Solar Farm is expected to yield an additional 450 million Baht, starting in late 2012 on top of everything else, ie. the next 7 wind projects.  If they sell out this solar farm say for a buyer wanting carbon credits, a huge one time windfall will come their way. Also, I think others like more green and service projects should be coming Demco’s way well before then. (I.e. the new 3 G towers for example).

Last but not least the company will likely pay an interim dividend this year. With the re-affirmed 40% payout ratio on net profit, the dividend yield should be around 7% on current prices, but higher if your average price is less then 4.88. I find this rather attractive for such a fast growing, low debt ever more green energy company.  The company has shown in the past that its very pro dividends as they paid the dividends to all shares, days after the warrants #1 were converted.

Since the number of shares outstanding will increase to 635 million later next year so will the average daily trading volume, this is already happening.  As we all to well know,  high average trading volume along with a higher market cap, Demco should so command a higher p/e multiple, not least if its perceived to be in the green energy field. If Demco  one day gets listed in the Energy sector the p/e should double. You can see how DEMCO now trades in the millions of shares per day with some peak days much higher, at this link:

I remain a Demco fan because while there are always risks, the execution of their business venture is lower risk.  I still view the stock a strong buy even after its 20% price rise since I pounded the table here in early February ’10.  The next key information we are awaiting is the Baht amount of this adder, for the wind energy, which is/must be announced very shortly as then its full steam ahead.  Demco is on course in becoming one of the countries' pure green energy company here as it has the combined long expertise in transmission systems, underground cables and substations.  It also is one of the few here which have the full permits to built 230,000 Volt lines..and Thailand's continued electrification remains a growth business.

Of course as always these must be stated as my viewpoints only. I welcome any questions, comments or observations.