My "valentines Day’stock pick for you is Demco. I just met the two principal officers of Demco, namely the Managing Director and the Chief Financial Officer, for just about 2 hours. I suggest you re-visit this report as I hope by this weekend to upload a few pictures and may make some minor revisions or additions. I welcome all comments, as always. You can view the full information memorandum on DEMCO at this SET link click here and insert Demco

Demco Public Co.’s offices are in Patumthani which is about an hour drive from downtown Bangkok. This companies’ headquarters are in a rural setting a few kilometers from the main road. It’s a typical Thai country road where the storks fly around and the setting is peaceful and unencumbered.

Demco’s corporate offices are set laid back on about 2-3 Rai of land just behind the firm’s employee cafeteria. Here is a two floor building with a long corridor in the middle and offices to each side. Its modest and low overhead, yet seemingly perfectly adequate for this high power electrical engineering high knowledge company on a high growth plan. I saw various employees busily working administrative tasks in a pleasant office setting. 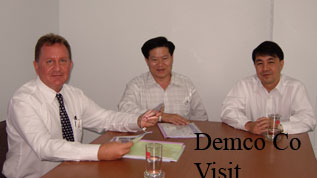 Demco was founded in June of 1992 by a group of seasoned electrical engineers whom have more then 20 years experience in the electrical distribution system, power substation, electrical transmission system and telecommunication, all let by Mr. Prakej Kittitsaranon the companies’ vigorous managing director. The registered capital was continuously increased over the past 15 years to currently 215 million Baht, at a PAR value of 1.

You can see their web site at: www.demco.co.th While the company has competition from about 10 other local firms, it believes that in many, if not all of the above business endeavors, Demco is the or a leader in that business segment. The company has some foreign competition mostly in the private sector (Brown Bovery, Siemens, etc) but it is not intense as foreign firms rather often have a higher cost structure. Demco is also at times a customer of these large foreign companies. Their business in one of much designing, supplying, sourcing, construction and installing of sophisticated electrical systems on a turnkey basis. The company also fabricates and erects telecommunication towers to customers whose communication system requires steel structures, such as Skymasts, and they erected some 60% of all DTAC towers. DTAC is a leading Thai mobile telephone air time provider.

Demco also provides optic fiber cable installation using blowing method technique for which this company is one of the only two service providers in Thailand. The Company has one factory in Lopburi and one warehouse in Patunthani. Demco has a factory which produces and supplies steel structure including hot dip galvanized steel, used in the erecting of communication and billboard towers. This factory has a capacity of 6000 tons per year but the capacity will be expanded to 12,000 tons within this first quarter.

The new capacity expansion will have full BOI tax benefits and yet the new depreciation charges is only expected to be around 4 mill. Baht per year, as the new machinery installed is costing around 40 mill. Baht. So depreciation charges will not be more then 3-4% of net earnings for this year, rather insignificant. Demco receives business as both a contractor and subcontractor. Over the past 3 years the contractor part has continuously increased from 77% to currently around 87%, with contractor jobs having higher profit margins.

Demco regularly gets large contracts from the Provincial Electrical Authority (PEA), EGAT, and PTT and other large government and private companies. At the end of September the company had over 1 billion Baht of back log from such clients and this has increased since. Also to construct high voltage transmission lines between train stations (230 KVA) now and in the future will benefit from planned public train/transportation expansion in Thailand. A true growth business. The company imports some 50% of parts it needs (but not steel) for the completion of projects which are not services. Imports are from Germany, Italy, USA. As such Demco is benefiting to some extend by the strong Baht currency. While in the future management might consider hedging the currency so to reduce risk on this, to-date Demco has not done much of this and to its benefit as the Baht has been the strongest in Asia recently.

But note that services provide some 75% of total revenues. Electrical and mechanical systems are the segment of their services which are growing the fastest, with telecom towers slowing down probably due to saturation points. The portion of government to private contracts has recently been reduced to about 75% private and 25% public and this is expected to continue. 3 years ago the public sector represented about 34% of total revenues. Yet, the mix of the two will probably fluctuate around 50/50 over the next few years. Government spending on electrical power grid systems is not expected to be halted or delayed due to political interference -as otherwise brown outs and blackouts will surely occur.

The long term growth trend for Thailand total electricity needs is estimated to be very close to 6% per annum and this for some years to go. In fact if anything, its expected to speed up as last years many delays were encountered when costs such as oil, copper and other raw material prices spiked causing delays in implementation. One good thing which came from these delays was the newer bidding system called “e-auction”. This was a previous Thaskin initiative where government contracts are first spec’t out and then bid for, so separating the many technical details from the financials. This greatly so reduces time lags and increased profit margins for companies like Demco. It is due to this newer “e-auction” system and the delays the older one produced why it is believed 2007 will be a much stronger year, with margins, for government project awards in the segment Demco operates.

Demco currently has 375 employees, half of which work in its factory and 60 of which are electrical, civil and mechanical engineers. The starting salary of a certified engineer in Thailand is 14,000 Baht per month which then increases some 10 to 15% which each added year of experience. Far lower then in developed countries and so a key Thai competitive advantage. *** The company went public on the MAI at 3.05 Baht per share in the first week of December of 2006. The company has no long term debt at all and uses only occasionally project financing -as its financial position is so very strong. The IPO proceeds were used for: working capital (50%), debt repayment (35%) and purchase of machinery (15%). After the IPO, insiders own 78% of the total shares as only 22%, or 50 mill. shares of the 210 million shares, were sold on the IPO. (There are also 5. mill warrants outstanding with a conversation ratio of 1 warrant to 1 share at one Baht per share, but this is rather insignificant as compared to the total outstanding shares, so earnings dilution per share is less then 2.5%).

After the IPO the managing director and president will own 51% of the outstanding shares with other mgt. mostly owning the balance of the 78%. So, including the warrants 215 million shares are outstanding, with 50 million issued to the public with their IPO. Asia Plus Securities was the financial advisor. As previously reported in a short write for members late last year, return on equity (ROE) for Demco was 24.29% for year 2005 and an impressive 45.28% for the year up until September 30 ’06. The company earned 0.53 Baht per share for the first 9 months of last year 2006.

And my estimate is for Demco to earn 0.60 EPS for the full year 2006. (Earnings for last quarter and for the full year, should be released around February 23-24). This is up considerably from 0.28 EPS for year 2005. The final 4th quarter of 2006 will have some one time expenses like 6 mill. Baht for the issuance of the IPO and a 9 mill Baht tax over-payment which the company believes it will get credited back in year 2007 The average weighted number of shares will expand this year from some 160 mill. last year, to post IPO, 210 mill. for this year 2007.

Hence while the net profit is expected to increase some 30% this year, the EPS will remain about the same, so my estimate for full calendar year 2007 is EPS of 0.65, or a p/e of 5 for this year on the current price of 3.14. Rather undemanding. While this company is growing considerably faster then the average Thai listed company, still this stock is trading at a 50% discount to the average p/e ratio as compared to the Thai SET market The dividend rate I expect to be 0.24 Baht for last year, payable in April/May ’07 and rising to 0.28 to 0.30 Baht for next year or some 9% yield on the current stock price. This is double the average yield of the Thai SET market. The book value is right around 2 Baht per share but this is not very significant as this company derives far more from professional engineering services then anything else.

I find the current dividend yield and its p/e rather undemanding, considering this company is a leader in a growing field, with no long term debt. Demco has expansion plans in force and should benefit from the continued growth in its core businesses. The next Thai government will most likely go on an expanded infrastructure spending spree wich would only further help Demco grow. Recall many of these plans were halted when the politics got messy early and mid last year. Thailand has plenty of money to catch up. Remember this previous member article for a better understanding on this: "Thailand is just simply exporting far too much and not spending nearly enough".

Demco’s business is a growth industry and one for many years to go, as electricity demands are ever more used & complex, and in all kinds of new applications. Twenty years ago electrical power demand was expected to show no growth in developed countries like USA, but the experts were dead wrong. As developed and developing countries evolve, electricity use (as mobile phone, computers & public transportation etc use), only grows more.

Electrical & underground distribution systems, high voltage substations which transform high voltage into usable voltage, high voltage transmission lines etc, A/C systems and water supply system are all growing fields which demand expertise, experience and proven know how, all elements which Demco excels and has years of experience in. the company has extensive contacts at the various government agencies since many of their engineers and senior management worked for these agencies prior to forming Demco in 1992.

Demco has an ongoing program of motivating all employees to learn English as it pays the tuition at the local AUA school and many have enrolled. Demco has no environmental disputes nor is it involved in any litigation of any significance. One slight negative to consider is the low number of shares outstanding, as such Demco is a micro cap stock which might not meet a larger individual or institutional investors appetite. Yet since its IPO, DEMCO shares trade fairly well.