DEMCO on its earnings near explosion now as the turning point has arrived.

DEMCO (12.70) offered as always for years already its regular quarterly "SET Opportunity day" presentation yesterday.  We listened to it in its entirety and came away smiling as it re-affirmed what I wrote here last July 22nd, and put to rest some of the nonsense analyst comments made during the August market sell off as I then pointed out in our member-lounge.  Here is my previous article on DEMCO:  https://thaistocks.com/content/demco-revisited-very-upbeat

Seasoned and newer members know that I remain a strong investor fan in this company -re-affirmed so all along.  I attest this by having 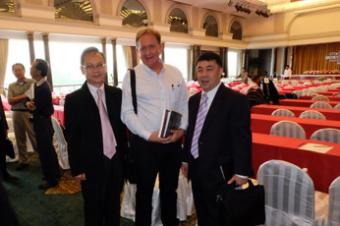 it as the only double weighting in the on-going stock models, for some time already.  One key reason, besides being a fan of management which I visited all along,  is the fact that this company’s earnings prospects are not dependent much on the Thai economy, the local consumer, tourism or exports. It also paid (pays) a nice dividend twice a year, all along.

This company has a colorful history besides stock price swings; too long to here summarize except to say its share price has more than tripled since I started "pounding the table";  at some point increased more than fivefold, only to correct back.  It’s one of the very few I did not advocate profit taking as it rose multiple fold, except around 16, in April of 2013 –just as it ascended to peak at 18. Only to a few months later view to get it back ever since.  This is a long rise from 3.50 per share where I started to view so very positively back in years 2011-2012.  Most all seasoned members here have a substantial realized and/or unrealized capital gain it.  I still say today, the best is yet to come.

DEMCO invested 4% in Wind Energy Holdings (WEH) a couple of years ago, which is the country’s largest renewable wind energy company. WEH was acquired through a majority stake by KPN 3 months ago.  Its a done deal and the final paperwork on all this will be complete within 60 days.  WEH has large multiple years long schedule on building 6-10 mega-wind farms over the next 4-5 years, most of which have all the legalities besides PPA’s firmly in place.

The key points of yesterdays’ presentation are:

As mentioned before this company will very likely report strong 3 and 4th Q earnings this year due in good part to revenue recognition by one of its client EA.  DEMCO just paid a 0.125 Baht interim dividend on September 10th.  Next year looks like the golden year for them due to many new jobs, not least the mega wind farm constructions very likely appointed by WEH.  Earnings wise,  I think it’s DEMCO time for 2H15 and into 2016!   For this year I estimate 0.70 earnings per share and 1.15 per share for year 2016.  DEMCO, a SET 100 index stock, is so trading at a p/e of barely 11 on 2016 earnings estimates,  far too low in my view.   Hence at some point I can see the stock flirting again with its all time high of +18, but this of course also depends the SET regaining some of its lost prominence of late, as I think it can.

Considering all the above and more, I here so today re-affirm my strong buy view on DEMCO trading at 12.70 as of 3 PM today.