Both phases of DEMCO's mega wind project are in full gear now, stated backlog and bidding for new jobs are at record levels.

The second phase of DEMCO massive wind energy project was announced by RATCH, the huge Thai utility company, in early December.  Hence all is on schedule  with this -and in full swing.

DEMCO's record current backlog and record new bidding, for more jobs into 2012.  Here are is more research on this mighty important selection for us into 2012, DEMCO's golden year.

I reported here before on DEMCO's stated backlog swelling to now stated at 9.4 Bill. Baht,  (including their just awarded ROJANA and 2 other substations which have high margins and must be completed by 1 Q. '12.  Both these are flood related jobs at high profit margins).

What may have gotten missed, in the mist, due to this being a similar number is that DEMCO has submitted envelopes (bidding for new jobs), for an additional 9.5 Bill Baht!                  2.6 Bill. being of core business related jobs bidding and 6.8 bill on more green energy ones bidding, where DEMCO is rapidly becoming the expert due to a long head start. According to the company next year will be “the year of 3 G”, where DEMCO also expects to get steel fabrication jobs. (erecting towers but realize this is not huge business compares to the overall picture).   The future for DEMCO for now is very much Wind and Solar energy.

Loopburi's "Energy Absolute" Solar job has started already and must be finished in 3 months. Many such jobs are relatively short term.  (Similar to PYLON).  Also, very few companies here can build substations of 380 Volt, 3 phase...and DEMCO has excellent sourcing of parts not produced in Thailand for all this.  Allot of new jobs can come from their long expertise in this as well.

According to the company, at their last Nov. 29 SET presentation, the Thai government is very supportive on such green projects,  giving it "Top line of government support".  By the way, their first windmill will produce its first electricity starting next May '12 already -and there are no delays!

Regarding this companies' relative large 1.1 Bill. Baht amount shown on the balance sheet as  something like "Completed work but yet unbilled installments".  Here are the facts on this: 51% of this, or some 530 mill. Baht, is due DEMCO from EGAT and TOT, so this is of no concern.  560 mill. is due by listed companies, like PTT group, ROJANA and some listed sugar companies, and only 160 mill. is due from non-listed companies or individuals. The company seems not concerned about this as they state that in their business, "these type of jobs things have to be tested and monitored as agreed before we can submit the final bill".

Also management, sales, engineering and other such fixed expenses are well in line and “not increasing”, due to DEMCO having here had excess capacity for some time in their previously awaiting, their "golden year".

Next year will be DEMCO's and PYLON's golden year and it has nothing to do with EU foot dragging or US deficits etc..or now more fragile (?)  global consumer spending, or Thai exports.  Since both these companies trade a low forward p/e I can see very little risk in the stock price.  Both should pay nice dividends while we await the price surge!

Below is a posting I made to our member lounge today and worth repeating:

As stated some weeks ago already, I am and remain adamant with DEMCO (3.84) and PYLON (3.56)  and while there are many other secondary picks to that, which all come out equal, none equal those two in my view -and at this time.

Members realize, you only need a few good ideas, not endlessly new ones which then only often confuse investors. My aim here now is to pound on that, not post endless new ideas. My view is clear: Members should "take a break" and just hold into these 2 great stocks for 2012 (and a few others choices here for diversification as I must always add this disclaimer).

Sometimes its not so desirable that a well held stock rocks-up too quickly, as it then forces us to sell -and with all that new cash invest in perhaps a less good story, which then destroys the gains just realized on the winner. A nice gain taken and invested in a looser is no gain in the end.

I love stocks where I have good/superior information which are not discovered yet and so can increase by what I will call "climbing the wall of no broker research yet". Realize if many brokers are bullish on say a chosen stock and have ample research on it, and so most people know the story, who is lef to buy it? Often a sign of a stock peaking is when many are bullish and further good news does not produce a higher stock price. This is so as most own it already and nobody is there left to buy.

This is just the opposite with DEMCO where so many don't know the story yet, the brokers have no research on it and the company is keeping relatively quiet. We know the story, but most of us own it already so there is little buying from our group.

Realize, as I said before, a company is not always interested in a higher stock price...if they (or their families) want to buy more shares surely they are not. In this case I think DEMCO is sort of keeping its "powder dry", or can we say "the lid on it" for mid 2012 at which time they supposedly will have a capital increase. At this time -and not really before- will they want to have the stock price higher....not jump higher before -and correct just before the capital increase. That would not serve the purpose to us longer term investors, nor the company which must execute this grand plan.

In the meantime this favourite should keep climbing this "wall of little information" here, as slowly more and more figure it out.

Below is my new schnapper fish (Banjar Red Arowana, or Dragon Fish) a baby male at 7 months -and we got him on the Thai King's Bday.  Destiny had it that we put him in the fish tank exactly at noon that day.  These noble fish are very curious and really on the ball, will "schnapp" the finger and definitely not vegetarian. We can give him small live fish to eat, but worms are better.. well taken care of great swimmer can live up to 80 years.

They are loners and can see up right through the water, which no human diver can do even with a mask...he would tear a cockroach apart in a minute. He sees everything here and watches, with rolling eyes. The fish tank here separates my office from the living room. 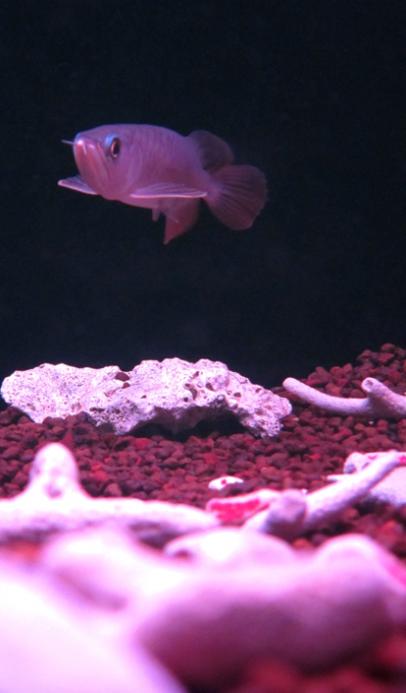