Post CV19 I am not a fan on US stocks, I think they will recover some but their long market bravado has ended.  I think the US economy will endure a longer time to get fired up again and there will be many new, yet not understood, disruptions... dire new ways and more. The political changes coming later this year will not help, as its far from clear now on politics in USA.  It just got muddled to say the least.  In the past high p/e's where justified due to its economy chuckling along -in an ultra low interest rate environment.  Now the former is debunked...the chuckling along part, gone. The US government is pilling on massive, massive new debt on top of already unsustainable levels due to by far record amount of stimulus programs -only enhanced so in a political US election year. Not long ago they told us the previous high govt. high debt was not a big problem as the stronger US economy would tame this down, it has not and will not. Republicans have lost their say in taming new spending due to the dire health crisis in the US.

While Thailand has its own dire shortcomings, not least as well a decelerating economy,  its fairing far better CV19 wise while still many shares posted heavy losses in February and March. The difference is many now so yield 3 to 5 times higher present dividends yields, then US stocks.  In the past the biggest complaint here was the strong Baht currency which held back the export economy, this has now been tamed! The tourism sector has taken a bad hit as well as some others, yet some sectors have not or barely been hit.  Hence to key is to be very selective, which Thai ETF funds cannot do.

Unlike popular media reports, Thailand is a developing country which is faring far better then most of the West, CV19 wise, as is Asia in general. There are some good reasons for this, but I will not dwell on that here.  Many say its been due to tropical weather, but then why does Florida, USA have 18,000 or more cases with a population of 21 mill., vs. Thailand only around 2500 cases with a population well over 3.2 times higher!  I know the cynics will say the numbers can't be believed or there is not enough testing etc...but I dare to challenge this acclaim.  The tourism and hotel sector and some others are in dire straights but unlike Thai ETF funds, which are chuck load full of AOT shares, we individual stock investors can chose to look elsewhere.  AOT regularly (as it is today) is the most active stock traded on the SET and many believe its the Thai stock bellwether, but they are using old time thinking: yes Monsieur things have changed at once.  (AOT is the Airports Authority of Thailand, which directly benefits or not, from tourism). Over the years we seen many changes in market leadership, and AOT has lost its radiance for now.  Time will tell. 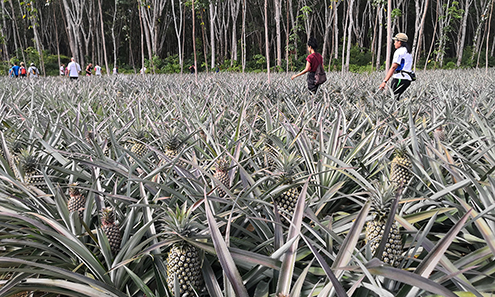 Its not so much that Thailand got better overnight, no it has not. Its more like Thai stocks sold off the most in this region since CV19 hit but/and came off a low base to begin with!  In the meantime the market everybody got to love, the US stock market, has taken a big hit and in my view is off its (now past) swaggering leadership.  Here I dare to make another prediction:  Tourism overall has lost its luster for some time, and so have the thousands of new hotel rooms supplied over the past years.  There now is a glut in hotel room and tourism fatigue has set-in which will last longer then many think, for all the reasons we now know and not.  Here we can intelligently chose to invest elsewhere!