CRANE is the story of high hidden value.

Here is an original member only article made available for all to see 3 weeks later.

CRANE (1.25) is a story of high hidden value.  Hearty lifting at a low market price.

Huge profit gain, whenever selling a crane due to excessive deprecation as compared to market price. The company’s underlying assets are going up in value, not down.

I had a very busy week in Bangkok with 6 company visits.  As usual, I went to see firms which are rarely if ever visited by local brokers. These must remain always focused on big cap stocks, so to cover their research cost. But to me, and nothing has changed over the years, the fastest growing lowest valued choices (along with highest dividends) are to be found in the many honest and hard working secondary counters.  CRANE is yet another such example reviewed here for you.

Most investors and speculators here are influenced by day trading and pure momentum investing.  These want to jump on a rising stock price, buy low and sell high, make a few thousand Baht and jump to the next.  Not too concerned with what the company does, its fundamental prospects -or relative valuation.  This approach can work in a bullish market but is full of risks as at the end of the day, fundamentals, relative valuation and dividends do matter! As I have shown here for years.  .

CRANE  provides services in moving and installing large equipment or Machinery by cranes, forklifts, container lifts, man lifts, and other equipment for construction and industrial projects. The firm also provides rental, refurbishment and after-sales services for used heavy machinery from overseas and employs about 500 people. You can see CRANE’s web site at:  www.chukai.co.th 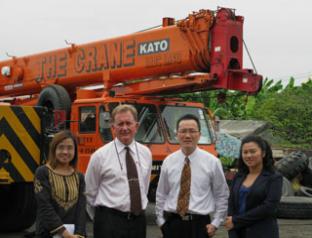 I first warmed up to CRANE around its IPO price at that time, mainly because as I then perceived a Thai infrastructure spending boom taking place.  It did not happen and so delayed, instead a global recession happened -and some of us got stuck in CRANE at much higher prices. To those I say consider averaging down now, as I remain very upbeat at the current low price as viewed from a medium to long term investment. Just as with TIES, I never really gave up CRANE.  Today, after a company visit update, I review why.

The company was IPO’d in early February of 2008 at 2.80 Baht per share. Briefly, then touching 3 Baht shortly after, only to then sink in value since its volatile beginning. The firm's major shareholder is Mr. Thongchai Praerangsi and his group, who collectively hold 65.64% of paid-up capital after the IPO.

CRANE was listed on March 29 ’07 and from the start among some controversy where the listing broker over allocated shares to one speculative group, which then manipulated the shares, only to dump then and go elsewhere. At the time I complained to the MAI about this broker activity. The broker was BFIT and their allocation strategy was flawed.

The company is the leader in Thailand, being the only firm which has a 800 ton lifting capacity crane. While foreign companies have cranes which can lift up to 1.2 tons, they must bring these cranes into Thailand at a considerable expense.  CRANE estimates it has a 20 to 30% market share and is the only listed company, it believes it has the best reputation in the business.  Its the only company to have ISO  9001/18.

CRANE ran into earnings disappointments as the global economic crisis took hold a few months after its listing status.  On top of this, it lost its highly capable finance director due to cancer last year.  Hence all went wrong in 2008 and the stock dropped to a low of nearly 1 Baht and now on this rebound I believe investors whom go stuck in CRANE should average down, or new members should consider this one in their value stock portfolio.  We were told the operating earnings recovery story is probably not coming until early 2010, but earnings is not the compelling reason for being excited, hidden value is the reason.

CRANE makes money in 2 key ways: just renting cranes with all the services and transportation to get it to the site, and 2 selling a used crane to a customer whom wants to buy.  The company’s revenues are seasonable with the 2nd half usually doing better.  Some of the largest petrochemical and infrastructure  companies in Thailand are Cranes’ customers.  SHELL, STECON, PTT, ITD even TRC, are customers, just to name a few. 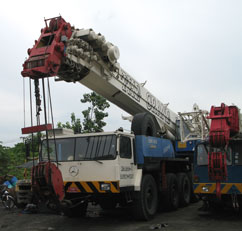 The compelling story on CRANE is one of high hidden value.  Here is more on the rational as I fist briefly posted in our web lounge early on Friday June 12 afternoon:

If you add the prudent mkt. value of their 100 big cranes they own, plus the land owned at a fair market price, minus the debt of the company...one comes up with over 4 Baht per share. We did this calculation together with the Finance Director of CRANE last Thursday.  The company owns 35 Rai of rather valuable land which is conservatively valued at 500 to 600 million Baht. (around 17 mill US$).

Note that mkt. prices of such large cranes have, unlike cars, a history of going up in value over time….depending on the economic swings of course.  As the prices of the cranes go up, so in time do the rental rates.  Now both are likely to happen as the economies are in recovery mode and firmer steel prices. On top of this there is a gap in new supply.

On the supply side, new larger cranes now have a delivery time of  up to 2 ½ years, as opposed to 1 year before. The reason is that Japan is the major producer in Asia of these, its own long economic recession means no longer building many large cranes. Hence no supply on hand and only made to order with a long waiting time. According to the company China is “10 years behind on such large cranes” -and in any event can’t keep-up with its own internal demand.  There is considerable demand for large cranes in the region, not just in Thailand. And through the eastern seaboard its relatively easy to ship cranes anywhere. Including to Vietnam, which has sizeable relative demand. The company says, besides Vietnams, it can and has sold cranes to various countries like Africa, Laos, Sudan Nigeria, Dubai & Middle East.

The current mkt. value of this heavy machinery is estimated at 2 Bill Baht. , add the company’s owned land at say 550 million Baht.  One so comes up with total assets of the company of around 2.55 Billion Baht (excluding a most modest amount of the building such as its office and other structures).  Then deduct the near 600 mill Baht debt (mostly financial leases) and so left is about 1.95 Bill. of assets, which will likely increases in value every year as explained.  1.95 Bill Baht divided by the 450 million shares outstanding, comes to an intrinsic value of 4.30 Baht per share!

Trade accounts receivables went from 75 mill.Baht in '07, to over 142 million Baht last year.  But no accounts are shown to be overdue and the amount of doubtful accounts dropped from 23 mill in ‘08 to 17 mill. Baht last year. Also, there was a reversal of allowance for doubtful accounts of 9 mill. You can see the detail on all this and more at http://www.chukai.co.th/asset/Note08e.pdf  (starting at page 15).  I also noted a 24 mill “loss on exchange rate”, in year ’08 due to the fluctuation Yen.  And there is/was some litigation for an insignificant amount (Page 33-34).   If you have any questions on this or other observations, I can try to ask them.

CRANE’s book value is shown at only 2.06 Baht per share, but this is because Thai accounting standards mandates a short/unrealistic 5 or at most 10 year depreciation rate on all machinery. Yet, this is totally off as a life expectancy of large cranes is 30 to 50 years. 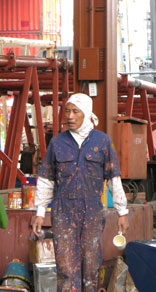 Depreciation of the Company and its subsidiaries for the year 2008, was in the amount of Baht 187.68 million in ’08 as compared to 2007, for which it was Baht 176 million. As noted this is a overly huge amount of expense amounting to some 0.40 Baht per share. It so is also the reason why the company would/will post a huge profit gain, whenever selling a crane.

If CRANE sells even 1-2 of their larger machines this year, it would likely show a large net profits of 200 million Baht  (or 0.22 Baht per share), as most of their cranes are already fully depreciated to near 0 residual value. The company told us they could easily sell into the economic recovery scenario (say to Vietnam, where there remains huge demand and low supply) but mgt. hesitates to do this unless they first find a replacement as their long term goal is to not deplete their inventory of cranes on hand.  Gains on sale of assets were only 1.8 mill in 2008, vs. 8.1 mill. in 2007.

Demand for cranes is cyclical and so the past 12 months have been challenging especially in their industry… but so will the opportunities on the recovery in place. Also the price of quality steel, the bones of cranes, will likely continue to increase in price again likely post the recession of ’08/’09.

Crane is not a company choice on low p/e or high dividends, its one of a high and hidden asset value through a distorted accounting picture along with no broker research on hand.  The company’s revenues and assets are now on the increasing again even while for all of 2009 profits remain under pressure.  There have not been any reported insider buy/sell transactions on CRANE shares since April ’08. 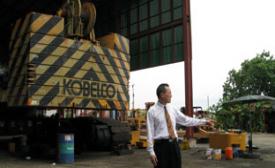 As shown its book value is well understated as its true and likely rising bv is convincingly well above 4 Baht per share. The current stock price at  1.25 is so less then 0.30% of its realistic replacement value….and with all the new various government infrastructures in motion in Thailand and around, surely CRANES lifting horses are a valuable asset which it will capitalize on in future earnings, due to its long experience and leadership in this important market.

My view is that CRANE should trade around at least its book value of 2 -and then further-up from there all depending how much it can turn profitablity around going into next year. Hence I rate it with a stronger buy view at the current price of 1.25 per share. Here is a hidden value story, vs. earnings momentum and high yield pick.  At the current price it deserves to be included in the value Thai stock portfolio, as I view it.

Below are a couple of follow-up questions I submitted to CRANE, because they only speak Thai I hope to receive an answer back shortly:

Thank you very much for meeting with us last week.  We appreciate the time you took to give us an update of your company which we follow with interest as shareholders.  I have already written a new report on your company, for our members.
We have some short follow up questions, which we would be most thankful if you could explain a bit more.
Trade accounts receivable went from 75 mill.Baht in '07,  to over 142 million Baht last year.  Is this due to the economic recession? Is this likely to result in future losses?   We also noted a 24 mill “loss on exchange rate” in year ’08.   Is this likely to continue or be reversed this year?   You mentioned to us the company has a 5 year depreciation rate on all machinery, but in the financial notes it states this to be 5-10 years.  Are most all of your heavy machinery (i.e. cranes) fully depreciated over 5 years?  And is there a final residual value given to such cranes, at the end of the deprecation period?
Thank you very much & Best Regards,
Paul A. Renaud
www.thaistocks.com