The fair and complete comparative comparison is often lacking.  As it takes a true and objective internationalist.

On a fairly irregular, regular basis I receive mail or comments on the many Thai shortcomings. These are often well intended and correct, but not complete as they don’t balance the shortcomings of other countries, which are different but nevertheless just as troublesome.  Comparative analysis is lacking.

What is often overlooked by such "white papers" by Western analysts or casual observers is that the alternative, say a full (Thai) democracy leaves many shortcoming as well. Often as the past has shown even more corruption, or even more expensive populist democracy and huge wastefulness, like the horrific Thai rice scam and more remember?

The memory is often short on what happened before this non-elected govt. took over.  Thai's, if I dare to generalize, are for the most part often followers and want/expect leadership to show them the way, even if its not perfect or tilted. Many have a hard time thinking "out of the box" or taking charge but this has benefits as well, often overlooked by so called Western think-tanks. They are patient and diligent and soo many are very hard working.  The country here does not suffer from the entitlement horror (see below) and the "sue me" culture of the West with their often out-of-reason multi-million dollar settlements.  In the US its become a huge business to claim "sexual harassment", where even a friendly pad on the back could result in the abyss. 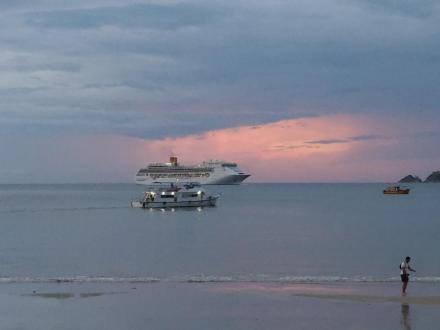 Overstating to make a point.

Look how the US its changing just now.  No longer insisting at every turn or negotiating table on imposing its own Western ways & values, instead accepting a more pragmatic global approach.  Human rights, free elections, women's emancipation etc..are all noble causes but to impose them come "left and right" have a huge cost.  We see a "new normal" at work and in time I think will get more done then antagonizing and patronizing other countries.

Allow me deviate a moment from the topic…yet to nail the point:

An ancient Chinese proverb: "Keep your friends close, keep your enemies closer".  One should keep an open mind for now.  Whatever Obama was doing regarding N. Korea definitely didn't work!  It made it worse.

Nobody for past 20 years had a good theory or practical result there.  Not talking about a "businessman", but all the Kennedy conventional school types which presumably mock Trump. What do they have to show for, white papers and think tank work? Nothing as it has failed.  Whether its pacification of China trade or military buildup this will cost 100's of billions. The longer postponed or politically dodged, the higher the cost of this avoidance or even of a conflict?  China has stated the US should be talking to N. Korea, despite the entire Washington consensus being against this.  If Trump succeeds in bringing this crazy man Mr. Kim to the table and convince him to start being more tame, it would be a major, major diplomatic victory -and then some.  Yet, its far too early to acclaim this. The only thing we can add is the alternative has not worked either.

Back to Thailand, it must be balanced in what is working vs. the West where what is not.  Low unemployment, stable currency, (Baht up 19% vs. AU$ in just 3 years and stable vs. the US$, up by far more vs. the EU or UK pound in recent times). Its relative low indebtedness here especially govt. and listed company wise vs. that dept horror in many developed countries, besides very few if any strikes, no shoot-ups in schools or shopping centers and not least, none of this huge immigration wave problem of W. Europe…only accelerating.

Also none of this entitlement and party attitude so prevalent by the young in USA, UK and the AU, nor the AU gambling or alcohol problem written here about not long ago.  Of course Thailand does have a huge problem with traffic deaths and also has a drug/alcohol/gambling addiction.  Yet, objectively most people work very hard here and save money, vs. in England, AU, USA etc. Where too many use any free time to "party", watch sports and linger on being lazy...God forbid to work on Weekends. One person complained to me in Tasmania for having to work at their Airport on weekends, evenwhile the pay was doubled to 55 AU$ an hour. (1475 Baht, or near 5 times the daily minimum wage here).  Also Western men are increasing being left behind.  Suicide rates and more are way up in the US for white Men between age 40 and 60...where those alarming stat's are only getting worse.  I read some numbers lately where in the US the average citizen does not even hold 1/4 a month wage in cash/savings, in case of any emergency. The list goes on.

Look at the below, sent from a reliable source:

These numbers help explain why these last eight years were disastrous for the USA.  l read the last item and then look at Trump's Cabinet. No wonder Washington, DC is in a turmoil. Trump's picks are bosses who expect their employees to work.  These are Eye Opening Numbers.  This is what bothers a lot of people about Trump. He won't accept a can't do attitude, or inexperienced, incompetent performance.  He will get results; it just might not be smooth or pretty.​

Here are some amazing stats: Make sure you read to the bottom.  An eye opener!

1. These 10 States now have more people on welfare than they do employed!

2. Last month, the Senate Budget Committee reports that in fiscal year 2012, between food stamps, housing support, child care, Medicaid and other benefits, the average U.S. Household below the poverty line received $168.00 a day in government support.

This helps explain the bias, if not the incompetence, of the last administration: ONLY 8% of them have ever worked in private business!   That's right!  Only eight percent - the least, by far of the last 19 presidents!  And these people tried to tell our corporations how to run their businesses?  How could Obama, president of a major nation and society, the one with the most successful economic system in world history, stand and talk about business when he's never worked for one?

Or about jobs when he has never really had one? And, when it's the same for 92% of his senior staff and closest advisers?  They've spent  most of their time in academia, government, and/or non-profit jobs or as "community organizers."  Probably a good idea to pass this on, because we'll NEVER see these facts in the main stream media, or from the alphabet networks.

Back to Thailand. Its always a balancing act to compare, not a singular approach  i.e. where is it better, overall?  Non-multicultural academics and others too often fail to see the total picture because they assume or they downplay their own weaknesses, more like are blind to them.  And by the way, Thailand has among the highest of any culture on high-level corporate women/CEO and doctor/dentist.  See the excellent reference book “Thailand’s Sustainable Development sourcebook,2015 on this and much more.  So even the occasional Western bias on assuming Thailand is a macho backwards country is ah, rather well off.  Thailand has its weaknesses and the political future just now is uncertain at this time but it has many strengths as well and only by embracing a fair and complete comparative international approach (soo difficult to most) can we strike a balance.