Is coming persistent inflation the biggest risk/culprit? I question?

Coming persistent inflation is the big headline-worry at present, but I question this.

Many believe broad inflation will be persistent and on the increase well into next year and beyond.  Is this a foregone conclusion?  Iron-ore for example has dropped considerably in the past few months, copper as well but less.  The price of gold, despite being continuously touted as the best inflation hedge, can hardly keep its price above 1800 US$.   In China, its been estimated that 75% of total consumer savings is in the (now increasingly shaky) real estate sector....and most believe it has peaked -if not outright falling into a new property fall-out crisis.

Many Thai expats have ventured into property over the years, as they can "see it, enjoy it and live in it". Vs. financial assets which they mostly don't understand. In Phuket, Thailand as just one example, there is an abundance of "plain vanilla nice houses", now far oversupplied and so hardly an asset which has increased in value over say the past 5 years or so. Similar with Bangkok Condo's which can, up to 49%, be owned by foreigners. Huge oversupply and prices stagnant.  All this vs. the Thai SET index which has done much better overall in comparison, especially since the Covit-19 outbreak ...and secondary smaller cap Thai stocks which have broadly outperformed the SET index since the outset of the pandemic.

Ms. Cathie Wood, the prominent and respected US investor believes "China Already Crashed. You Just Don't Know It Yet".  China today is like Japan in the early 1990's she claims. Hence is it right to believe coming broad inflation has nowhere to go but up?    Not least, because if China slows down further, lead by its risky property sector, it will tame and then some global demand for all commodities! 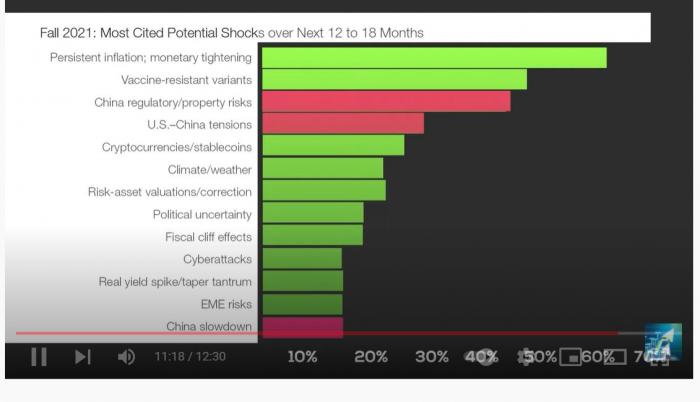 Yet, note the chart here how most believe inflation is the biggest risk/culprit over the next year or so, but I question this as being far from a foregone conclusion.