Changes are coming./ Pointing out a market abnormality.

Changes are likely coming./ Pointing out a likely market abnormality.

I think we are increasingly at an important juncture. On the one hand the Thai economy overall is not doing well, lead with tourist arrivals being all but dead....for now. On the other spectrum the biggest market in the world, US stocks, have for years been running-up to now at stratospheric valuation.  With Trump gone (and likely to be prosecuted) a new chapter in the US has started -and it does not look very good.

The CV19 pandemic has devastated people across all aspects of life and work and in the US -almost worse then anywhere else. This has exasperated Mental Health to horrific proportions -where already last June people considering suicide there has doubled, compared to the year before. Credible numbers on this are tabulated nationwide every June of each year. 70 mill. people are out or lost their jobs and many on top lost a parent or loved one.  Further, bad politics and the Trump fiasco has created a sense of lost pride for their country where many rightly believe justice has not just (not yet) served!  Bref, the US is a hotbed for some kind of destabilization (lack of better word) brewing and at some point it will affect their stock market!  At the same time, many global investor gurus now believe a new era of investor new merits has started for many Emerging Markets.  Its difficult to predict if Thailand will be part of it?  But one thing is for sure, once this pandemic passes (and it will) a surge of pent-up demand will emerge and many tourists, like more upscale I dare to predict, will come back to visit or even come live/retire in Thailand.  As here is another prediction I dare state:  post CV19, many upper income people will realize that they want a change of life along with geography.  Thailand will surely benefit from this change of behavior by an incremental part of the developed world population. Even a very small change could have immense impact.

If you go beyond the broad market and all its nonsense, shortcomings and broker misbehaviors, there are definitely some very interesting companies to be found on the SET. Elsewhere and ongoing I have identified some and will continue to do so. My last favorable posting on GULF (33.50) just being my latest example.  Keep posted.

Late last week I noted an abnormality I want to share with members. ITEL (3.10) a quality small cap stock featured in my current portfolio issued fr 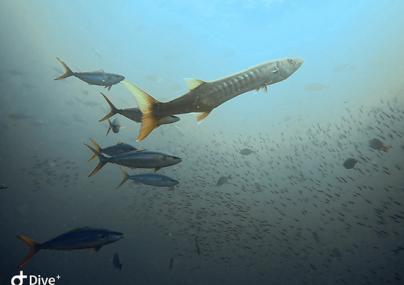 ee warrants2 last year. They have been boring for a while and of late, even as the stock price rose a bit recently while/despite the SET index correcting.  Then on Friday, late morning, they woke up with a vengeance and rocketed up 25% (in 2 days) on very high volume of 35 mill. units. This despite the underlying stock price of ITEL not moving much. In fact on Friday it closed down a spread.  Why such a discrepancy? This could signal that some smart/informed investors are getting in, as they may know something.  I could post graphs here to show this of this surge, but you get the picture.  My hunch, and I could be wrong, is that something is up with ITEL and the move on the warrants 2 are a precursor.  BTW, ITEL-W2 expire in August 2021, and are convertible at 3.0 Baht. Perhaps it just an aberration and a large investor noticed they were under priced, but I think more like something is up with ITEL.

Best Regards on the last day of January,

The picture shows a lonely large Barracuda following/watching us on a diving trip to the Similan Islands a few days ago.